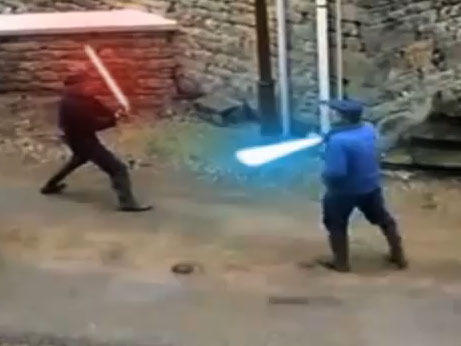 (CBS) - Okay, I will openly admit I am a huge Star Wars fan. I love the Trek, but am obsessed with the Wars. Which is why I'm so delighted by this very clever video that has been edited from original form to include an epic Star Wars twist.

Caught-on-tape video footage shows a group of elder French men in an argument that quickly develops into a full-on fight. But what appears to have been pipes or sticks used by these men in the original video has been altered to give the appearance of a ferocious battle between them with...wait for it...LIGHT SABERS!

If you're as big a fan of Star Wars as I am, you will love this video. And if you're not, you will still LOL, I promise. And if you don't, well...phooey on you, then!