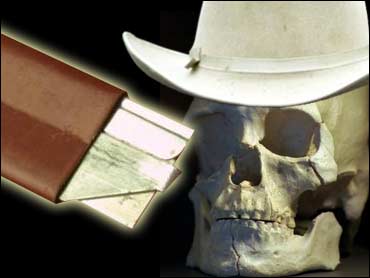 Assailants attacked the director of a Paris theater that staged a play critical of President Bush, punching him and slashing his face with a box cutter, the theater said.

Attilio Maggiulli, director of the Theater of Italian Comedy, was attacked in the building's entrance on Sunday, said Claudine Simon, his assistant. One man held him down, while another cut his face. They also splashed paint on the theater's walls, she said.

It was unclear exactly what motivated the beating, said Simon, who said she found her employer bleeding in the entryway. Since Wednesday, the theater had been showing a play called "George W. Bush, or God's Sad Cowboy."

Simon suggested the assailants might have been offended by a poster showing a skull in a cowboy hat to represent Mr. Bush, or by a photo of an Afghan man that the theater showed as part of its publicity display.

"They said things like, 'Oh, you're defending the Arabs,'" Simon said. They also insulted French President Jacques Chirac, one of the main opponents of the U.S.-led war in Iraq. The play is critical of Mr. Bush but doesn't directly touch on the Arab world, Simon said.

The assailants fled, and Maggiulli was treated at a Paris hospital, Simon said.

The theater director wants to shut down the play to protect the actors, but a final decision has not yet been made, Simon said. Maggiulli founded the theater in the Montparnasse neighborhood, which stages works by Italian playwrights performed in French.