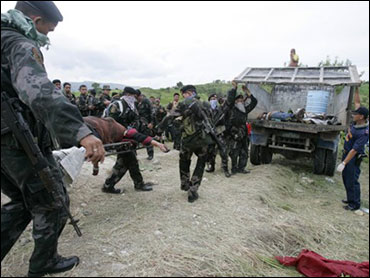 The Philippine president placed two southern provinces under emergency rule Tuesday as security forces unearthed more bodies, pushing the death toll to 46 in some of the deadliest election violence in the nation's history.

Police and soldiers found 22 bodies in a hillside mass grave Tuesday, adding to the 24 bullet-riddled bodies recovered near the scene of Monday's massacre in Maguindanao province, said Chief Superintendent Josefino Cataluna of the Central Mindanao region.

According to police, the bodies were piled on top of each other and looked like they were buried in a hurry, reports CBS News reporter Barnaby Lo.

This southern region of the Philippines is wracked by violent political rivalries, in addition to a long-running Islamic insurgency, but the killings have shocked this Southeast Asian nation. One adviser to President Gloria Macapagal Arroyo has described the massacre as the worst in the country's recent history. A media rights watchdog also says that it appears to be the world's worst mass killing of journalists, with as many as 20 reportedly among the dead.

Dozens of gunmen abducted the group of journalists, supporters and relatives of a gubernatorial candidate as they traveled through Amputuan township Monday to file candidacy documents in the provincial capital for May 2010 elections.

The gubernatorial candidate, Ismael Mangudadatu, who was not a part of the convoy, accused a powerful political rival from the Amputuan clan of being behind the slayings. There is a longstanding bitterness between the two families.

Mangudadatu's wife, Genalyn, and his two sisters, were among the dead.

The bodies found in the grave, about six feet (two meters) deep, were dumped on top of one another. They included a pregnant woman. Grieving relatives helped identify their loved ones before they were given the bodies, covered by banana leaves, for burial.

Officials were still trying to determine the exact number of people intercepted by the gunmen and whether any had survived. Authorities have said the convoy comprised about 40 people, but Cataluna said at least five other people were still missing.

Arroyo declared an emergency in the provinces of Maguindanao and nearby Sultan Kudarat, allowing security forces to conduct random searches and set up checkpoints to pursue the gunmen.

Arroyo said she ordered police and the military "to conduct immediate, relentless pursuit against the perpetrators to secure the affected areas."

"No effort will be spared to bring justice to the victims and hold the perpetrators accountable to the full limit of the law," she said.

The emergency will remain in place until the president is confident that law and order have been restored in the region, her spokesman Cerge Remonde said.

Police and Joy Sonza, head of a small private TV station, UNTV, identified at least three journalists among the dead.

Noynoy Espina, vice chairman of the National Union of Journalists of the Philippines, said in all, at least 20 journalists were among those killed, based on reports from union chapters in the area.

If confirmed, it would be the "largest single massacre of journalists ever," according to Paris-based Reporters Without Borders.

More than 100 journalists, many wearing black shirts and black arm bands with the words, "Stop Killing Journalists," staged a protest against the killings in Manila. Another 200 of their colleagues also denounced the massacre in southern Davao city.

The government stressed that it would go after the culprits, regardless of where the investigation leads.

"No one will be untouchable," Remonde told reporters.

National police chief Jesus Verzosa relieved Maguindanao's provincial police chief and three other officers of their duties and confined them to camp while they are investigated. One of the police officers was reported to have been seen in the company of the gunmen and pro-government militiamen who stopped the convoy, police said.

Such militiamen are meant to act as an auxiliary force mobilized by the police or military to fight rebels and criminals, but often they act as private enforcers of local warlords.

Mangudadatu said Tuesday that four witnesses had told him the convoy was stopped by gunmen loyal to Andal Ampatuan Jr., a town mayor belonging to a powerful clan and his family's fierce political rival.

He refused to name the witnesses or offer other details.

"It was really planned because they had already dug a huge hole (for the bodies)," Mangudadatu said.

The region, among the nation's poorest and awash with weapons, has been intermittently ruled by the Ampatuan family since 2001. It is allied with Arroyo.

Arroyo's political adviser Gabriel Claudio said he was meeting with Zaldy Ampatuan, governor of the Autonomous Region in Muslim Mindanao, where Maguindanao province is located, to try to mediate in the long-running rivalry between the Ampatuans and the Mangudadatus.

He said the most important thing was to ensure there was no more violence.

"There has to be swift and decisive justice," Claudio said.

Philippine elections are particularly violent in the south because of the presence of armed groups, including Muslim rebels fighting for self-rule in the predominantly Roman Catholic nation, and political warlords who maintain private armies.

The last elections in 2007 were considered peaceful, even though about 130 people were killed.

The decades-long Muslim insurgency has killed about 120,000 people since the 1970s.

Julkipli Wadi, a professor of Islamic studies at the University of the Philippines, said he doubted the national government's resolve in trimming the powers of political dynasties like the Ampatuans because they deliver votes during elections.

"Because of the absence of viable political institutions, powerful men are taking over," he said. "Big political forces and personalities in the national government are sustaining the warlords, especially during election time, because they rely on big families for their votes."