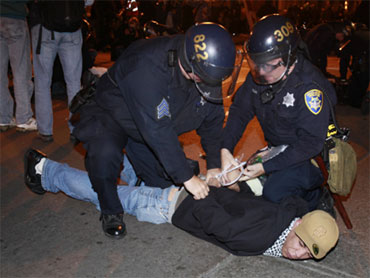 Hundreds reacted in anger Thursday following the involuntary manslaughter conviction in the shooting death of an unarmed black man at the hands of a white former transit officer.

About 800 people demonstrated in downtown Oakland after Johannes Mehserle was convicted of the lesser charge in the videotaped shooting death of Oscar Grant III at Oakland's Fruitvale BART station in 2009.

Police in riot gear Thursday had maintained a watchful eye over a crowd of protesters as emotions ran high. Members of a crowd near City Hall moaned and cursed when they heard the verdict.

Sporadic violence later broke out and police said they made 83 arrests throughout the night for violations that included failure to disperse, vandalism and assaulting a police officer.

At least a dozen businesses were damaged, including a looted Foot Locker store and a ransacked jewelry store, police said.

Police said a crowd broke windows and forced their way into a Foot Locker athletic shoe store after sunset and began taking items. A jewelry store was also ransacked.

Graffiti was painted on the walls of a Rite Aid drug store, and windows were broken at a nearby Subway sandwich shop and at the Far East National Bank opposite Oakland City Hall.

At least one woman was injured when some elements in the crowd began throwing rocks and bottles, police said. Authorities told CBS Station KPIX that some protesters were throwing fireworks at police.

A small incendiary device was also detonated near a downtown police station that caused no damage.

"This city is not the wild, wild west," said Oakland Police Chief Anthony Batts. "This city will not tolerate this sort of activity."

Though police did not release a damage estimate, the protesting appeared to be much less severe than the rioting that hit Oakland after Grant was shot.

Even though the protests wound down late Thursday, Batts expected the number of arrests to double overnight.

Mayor Ron Dellums said he was pleased with the police response and pleaded for those unhappy with the involuntary manslaughter verdict to protest peacefully.

He acknowledged that many in the community were outraged at what they believed was an unjust verdict, but urged them to reject violence as they expressed their frustration.

Peaceful protesters reacted to the violence with dismay. "There is no need for this. This makes us look like animals. We came here for peace," Jonathan Trotter told KPIX. "This is a justification for the verdict."

Prosecutors had wanted Mehserle convicted of murdering Grant. So Thursday's lesser verdict raised concerns of a repeat of the rioting that followed the shooting on New Year's Day in 2009 on an Oakland train platform. The trial was moved to Los Angeles following the riots.

During the trial, prosecutors said the 28-year-old Mehserle became angry at the 22-year-old Grant for resisting arrest. He was shot in the back while he lay face-down. Mehserle claims he mistakenly drew his gun instead of his Taser.

The jury had a choice between second-degree murder and lesser charges of voluntary and involuntary manslaughter. The jury found that Mehserle didn't mean to kill Grant, but that his behavior was still so negligent that it was criminal. Involuntary manslaughter convictions carry a sentence of two to four years.

During the trial, Wanda Johnson sat most days in the second row of a Los Angeles courtroom less than 30 feet from the man who killed her son. She hoped and prayed the justice system wouldn't fail her.

After the jury's finding, Johnson denounced the verdict and let loose emotions that had been mostly bottled up during the three-week trial.

As Mehserle was placed in handcuffs and taken away, he turned to his family and mouthed, "I love you guys."

Gov. Arnold Schwarzenegger issued a statement urging Californians to remain calm and not resort to violence. Schwarzenegger said he had informed Oakland Mayor Ron Dellums the state was well prepared to assist in maintaining order.

The finding on use of a gun allegation could be used to add as much as 10 years to a prison sentence. The next hearing was set for Aug. 6.

The jury included eight women and four men. None listed their race as black. Seven said they were white, three were Latino, and one was Asian-Pacific. One declined to state their race. They left the courthouse under tight security.

"As we have come to notice, and we as a family has been slapped in the face by a system that has denied us a right to true justice," said Cephus Johnson, Grant's uncle. "We truly do not blame the jury, but we blame the system."

At least five bystanders videotaped the incident in what was among the most racially polarizing cases in California since four Los Angeles officers were acquitted in 1992 in the beating of Rodney King.

The trial was moved from Alameda County to Los Angeles because of racial tension and extensive media coverage.

The case was a rare instance in which a police officer stood trial for an on-duty killing and that was captured on video from so many different angles.

"It is legally as low as they could go without acquitting him," University of California, Berkeley, law school professor Erin Murphy said. Prosecutors had a "huge hurdle" to overcome in convincing a jury that an officer with a spotless record meant to kill, even with video of the killing, she said.

Alameda County D.A. Nancy O'Malley said, "It's important to note that this jury did not relieve Johannes Mehserle of his criminal liability. The punishment for his crime carries a sentence of two, three or four years in state prison."

Mehserle testified that he struggled with Grant and saw him digging in his pocket as officers responded to reports of a fight at a train station. Fearing Grant may have a weapon, Mehserle said he decided to shock Grant with his Taser but pulled his .40-caliber handgun instead.

Alameda County Deputy District Attorney David Stein said in his closing argument that Mehserle let his emotions get the better of him and intended to shoot Grant with the handgun without justification.

Defense attorney Michael Rains contended the shooting was a tragic accident. Mehserle had no motive to shoot Grant, even though he was resisting arrest, the lawyer argued.