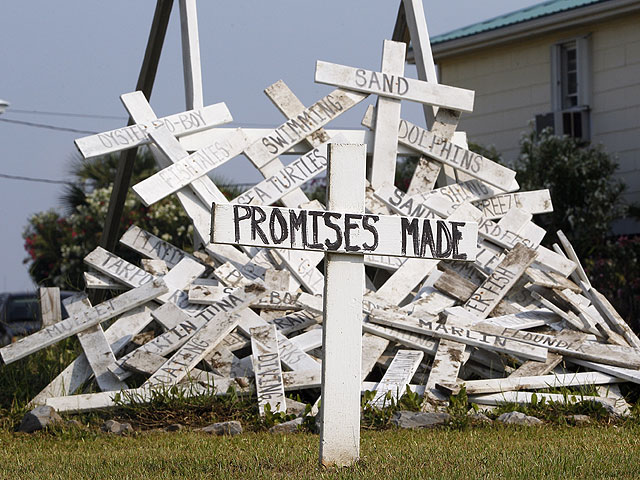 NEW ORLEANS - Relatives flew over Gulf of Mexico waters on Wednesday where 11 oil rig workers died a year ago, residents gathered in quiet prayer vigils onshore and President Barack Obama vowed to hold BP and others accountable for "the painful losses that they've caused."

Louisiana Gov. Bobby Jindal said more than 300 miles of Louisiana coastline continues to see some BP oil. He was joined by the presidents of six coastal parishes for a commemoration on Grand Isle, a coastal barrier island that took major impact from the oil.

CBS News correspondent Mark Strassman reports that for some of the survivors of the Deepwater Horizon rig explosion that set off the disaster harbor resentment towards Transocean, the rig's operator, and BP. Matt Jacobs was a general laborer on the rig who survived the explosion, and he lives with nightmares of that night and PTSD.

"They were always preaching safety first, but I didn't see nothing safe about how they had been operating," Jacobs said while attending a memorial service for Gordon Jones, who died in the rig explosion.

Somber remembrances throughout the region marked the one-year anniversary of the rig explosion that caused the worst offshore oil spill in American history. But all is not bleak. Beaches, restaurants and hotels are filling up again, and experts say the resilient Gulf is on the mend.

The disaster began on the night of April 20, 2010, when the Deepwater Horizon rig burst into flames and killed the 11 men. The rest of the crew evacuated, but two days later the rig toppled into the Gulf and sank to the sea floor. The bodies were never recovered.

Over the next 85 days, 206 million gallons of oil -- 19 times more than the Exxon Valdez spilled -- spewed from the well. In response, the nation commandeered the largest offshore fleet of vessels since D-Day, and BP spent billions of dollars to clean up the mess, saving itself from collapse.

"I can't believe tomorrow has been one year because it seems like everything just happened," Courtney Kemp, whose husband Roy Wyatt Kemp was killed on the rig, wrote on her Facebook page Tuesday. "I have learned a lot of things through all of this but the most important is to live each day as if it were your last ... what matters is if you truly live."

Natalie Roshto, whose husband Shane Roshto also died on the rig, posted a message on Courtney Kemp's Facebook page on Tuesday evening: "Can't believe it's been a year.. It has brought a lot of tears and a great friendship I'm Soooo thankful for.. We are a strong force together!! Love u sista."

In a statement, President Barack Obama paid tribute to those killed in the blast and thanked the thousands of responders who "worked tirelessly to mitigate the worst impacts" of the oil spill.

"We continue to hold BP and other responsible parties fully accountable for the damage they've done and the painful losses that they've caused," he said.

Transocean, the ill-fated rig's owner, invited up to three members of each family to attend the flyover. They were expected to circle the site a few times in a helicopter, though there is no visible marker identifying where their loved ones perished. At the bottom of the sea, 11 stars were imprinted on the well's final cap.

Several families said they didn't want to go on the flyover, and Transocean didn't allow media.

At a solemn candle-lit ceremony facing New Orleans' cathedral in Jackson Square shortly after sunrise, environmentalists and religious leaders joined to remember the perished rig workers and call on the nation to take the steps to prevent another environmental catastrophe. The ceremony organized by the Sierra Club attracted only a handful of attendees, underscoring the point of a rabbi who addressed the group.

"Our souls are slumbering in moral indifference," said Rabbi Edward Cohn of the Temple Sinai in New Orleans. "People quite rightly are asking: How and when, and by whose insistence and stubborn support, will the public's mind be refocused upon what happened in the Gulf?"

Elsewhere around the world, BP employees were observing a minute of silence.

"We are committed to meet our obligations to those affected by this tragedy and we will continue our work to strengthen safety and risk management across BP," BP chief executive Bob Dudley said in a message on the company's website. "But most of all today, we remember 11 fellow workers and we deeply regret the loss of their lives."

The solemn ceremonies underscore the delicate healing that is only now taking shape. Oil still occasionally rolls up on beaches in the form of tar balls, and fishermen face an uncertain future.

Louis and Audrey Neal of Pass Christian, Miss., who make their living from crabbing, said it's gotten so bad since the spill that they're contemplating divorce and facing foreclosure.

"I don't see any daylight at the end of this tunnel. I don't see any hope at all. We thought we'd see hope after a year, but there's nothing," Audrey Neal said.

His wife said the couple received about $53,000 from BP early on, but that was just enough money to cover three months of debt. They haven't received any funds from an administrator handing out compensation from a $20 billion fund set up by BP, they said.

Still, there are some positive signs of recovery.

Traffic jams on the narrow coastal roads of Alabama, crowded seafood restaurants in Florida and families vacationing along the Louisiana coast attest to the fact that familiar routines are returning, albeit slowly.

Scientists remain divided on the longer-term impact of the spill for the Gulf, CBS News correspondent Mark Strassmann reports.

"I don't think we're gong to see any massive impacts as we go forward," says Ed Overton, a Louisiana State University environmental scientist who has studied the spill since day one. He suggests the Gulf's eco-system is recovering faster than expected.

"There were predictions the Gulf would become a dead and dying body for decades, maybe for centuries," Overton tells CBS News. "That clearly is not going to happen."

But University of Georgia marine scientist Samantha Joye is much more pessimistic. Last December, she led a deep dive expedition near a runaway well. She's now studying 450 core samples, many of them thick sludge smothering the sea floor.

"It's really fallen off the radar and people aren't thinking about it and they've been told everything is fine when it most certainly isn't," warned Joyce.

Most scientists agree the effects "were not as severe as many had predicted," said Christopher D'Elia, dean at the School of the Coast and Environment at Louisiana State University. "People had said this was an ecological Armageddon, and that did not come to pass."

But biologists are still concerned about the spill's long-term effect on marine life.

Accumulated oil is believed to lie on the bottom of the Gulf, and it still shows up as a thick, gooey black crust along miles of Louisiana's marshy shoreline. Scientists have begun to notice that the land in many places is eroding.

Roseau cane is growing again where it was cut away during early cleanup efforts, but Barham said the 3- to 4-foot-high stalks should be a lush green. Instead, they were pale green and brown.

"It's because of oil in the root system," Barham said. He put his hand into the dirt and pulled up mud saturated with oil. Tossing the sludge into nearby water, it released a rainbow-colored sheen.

Barham complained that BP had not done enough to clean the area. "What they've done thus far is not working."

Back from his first shrimping run since the spill, Ted Petrie docked his boat Wednesday at the Grand Isle marina where Gov. Bobby Jindal planned to hold a press briefing to mark the anniversary.

He said he worries about the Gulf fishing industry's long-term prospects in the aftermath of the spill. That's why he is opting to pursue his claim against BP in court rather than settle for a quick payout from the company's $20 billion claims fund, as many of his fellow fishermen have done.

"I got tired of messing with it." Petrie said of the claims process. "They gave everybody the runaround."

Still, he said he's grateful to be back on the water doing the job he has done for 40 years. He hauled in about 2,000 pounds of shrimp in three days, enough for a modest profit.