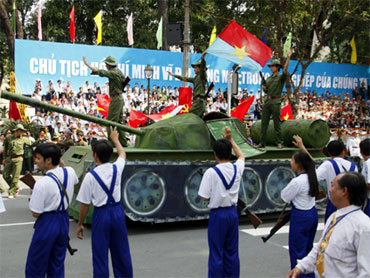 Vietnam marked the 35th anniversary of the Communist victory in the Vietnam War with a grand military parade Friday through the former Saigon, with the government basking more in its economic achievements than its historic military defeat of the United States.

The city is now named for Ho Chi Minh, the father of the revolution, but signs of the burgeoning market economy are everywhere, with Communist banners competing for space with corporate ads and logos.

Some 50,000 invitees, many waving red and gold ruling party flags, crowded the parade route. They marked the day that North Vietnamese tanks smashed through the gates of the former Presidential Palace in Saigon and ousted the U.S.-backed South Vietnam government - the culmination of one of the most seismic military achievements since World War II.

The parade brought back vivid memories for Do Thi Thanh Thuy, 49, who watched the tanks roll by her home on April 30, 1975, when she was a junior high student. She and her neighbors on the outskirts of the city had run into the streets to cheer.

"When I saw those tanks, I felt so happy," said Thuy, who on Friday carried a hammer and a sickle flag. "The South had been liberated, the country was united, and the war was over."

The fall of Saigon marked the official end of the Vietnam War and the decadelong U.S. campaign against communism in Southeast Asia. The conflict claimed some 58,000 American lives and an estimated 3 million Vietnamese.

The war left divisions that would take years to heal as many former South Vietnamese soldiers were sent to Communist re-education camps and hundreds of thousands of their relatives fled the country.

In Friday's re-enactment of the war's end, everyone in the former Saigon greeted the Communist troops with jubilation. A tank replica rolled by and soldiers in white uniforms goose-stepped their way down the former Reunification Boulevard, later renamed Le Duan Street after a former Communist Party chief.

Battalions of women soldiers marched by carrying rifles and wearing the black-and-white checkered scarves made famous by the former Viet Cong guerrillas. Patriotic songs blared, some to a pulsing disco beat.

In a reminder of how the Communist Party retains a strong grip on the flow of information despite the opening of the economy, foreign journalists were forbidden from conducting interviews along the parade route. The area was sealed off from ordinary citizens, apparently due to security concerns.

President Nguyen Minh Triet was joined at the parade by leaders and dignitaries from Cuba, Russia and neighboring Cambodia and Laos. Most of those in the crowd were war veterans, party cadres and others selected by local communist organizations.

Among the veterans was Huynh Van Quan, 70, who helped build the famous Cu Chi tunnels outside Saigon, an elaborate underground network where Viet Cong guerrillas sought refuge from American bomber planes. He sat beneath one of the hundreds of portraits of Ho Chi Minh that dotted the route.

Quan, who has attended each of the 35 anniversary ceremonies since the war's end, declared the anniversary a "very important day for the Vietnamese nation." He reminisced about how skilled his comrades were in fighting the United Sates.

A usual honored guest, former Gen. Vo Nguyen Giap, 98, architect of Vietnam's military campaigns against their former French colonial rulers and then the Americans, was too ill to attend.

Friday's speeches were sprinkled with timeworn Communist slogans and quotes from Ho Chi Minh, including perhaps his most famous, which was invoked by Le Thanh Hai, the Ho Chi Minh Communist Party chief: "There is nothing more precious than independence and freedom."

But Hai focused his remarks on Vietnam's economic achievements, for which Ho Chi Minh City has served as the engine. The city generated more than 20 percent of the nation's gross domestic product last year and 30 percent of its tax revenues, Hai said. The city's economic growth has averaged more than 10 percent a year since 1986.

Much of Vietnam's growth is being fueled by foreign investment and trade, and in recent years, the United States has become Vietnam's main trading partner. 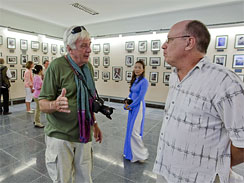 (AP Photo/Le Quang Nhat)
"The U.S. is a friend of Vietnam now," said Do Phuoc Man, 17, who woke up at 3 a.m. to attend Friday's festivities, which began at 6:30 a.m. "We've seen growing investment from the United States, which is to our mutual benefit."

(Left: Tim Page, left, a former Vietnam war photographer, answers questions from a visitor at the opening of a new exhibition, "Requiem: The Vietnam Collection" at the Vietnam War Museum in Ho Chi Minh City. The exhibition pays tribute to the 135 photojournalists who were killed or went missing during the wars in Vietnam and Indochina. )

Although the two nations have grown much closer since the war, they disagree over issues such as human rights and press freedom.

In a speech, Lt. Gen. Le Thanh Tam, the chairman of the Ho Chi Minh City Veterans Association, warned that Vietnam must be wary of "hostile forces who use democracy and human rights as a pretext to sabotage Vietnam."

"We affirm that the Communist Party of Vietnam is the only party which has the prestige to lead the Vietnamese people to stable development and international integration," Tam said.
By Associated Press Writer Ben Stocking