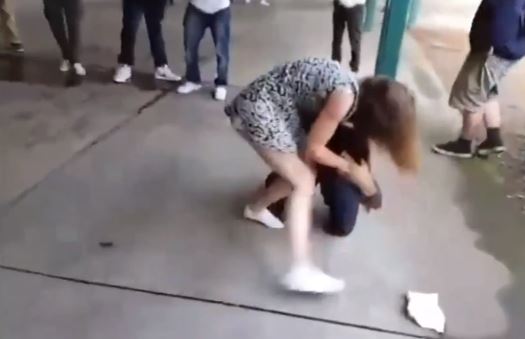 SAN FRANCISCO -- A girl attacked a boy on the campus of Sonoma Valley High School last week and a video of the fight has gone viral.

The video posted on Facebook of a school lunch fight, shows a girl throwing a boy to the ground, kneeing him in the face and then running off.

The brawl happened Thursday and as of Tuesday night, the video had been viewed more than 12 million times on Facebook.

A new video, obtained exclusively by CBS San Francisco, shows the moments before the fight. The girl can be seen taking a few swings at the boy and at one point someone tries holding her back.

"We are working with our community, our students to talk about social responsibility, digital citizenship, and to understand the effects of social media," Hawing said.

Students have said both teens in the fight are freshmen and that the boy goes to Sonoma Valley High School while the girl goes to Creekside High School -- an alternative school located on the campus.

Creekside High School principal Sydney Smith said, "as far as I know there are not any major issues between our two schools, and we're not in competition."

The school asked Facebook to take down the video, but according to the school, Facebook declined saying that the video does not violate its community standards.

Smith said "the lesson to come out of this is to think twice, and if it's not nice, don't post it."

Police were not immediately called to the high school when the fight broke out because the school has a resource officer on campus.