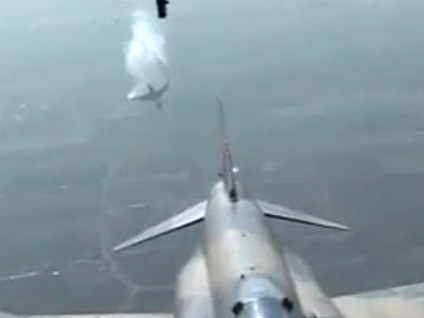 A previously-unseen video posted on YouTube apparently shows the 2009 crash of an Iranian military jet outside Tehran in 2009.

The accident in which the Ilyushin IL-76MD went down in flames occurred following a military air show and parade on September 22, 2009.

The video was taken by the crew of a C-130 that was recording an F-4 Phantom II. Off in the distance, the Iranian plane can be seen tumbling to Earth and crashing in a giant fireball.

The YouTube video, posted by a user in Iran, was labeled "Caspian Airlines Tu-154 Crash," referring to an Armenia-bound passenger plane that went down near the Iranian city of Qazvin on July 15, 2009, killing 168 passengers and crew, though the video does not match an eyewitness description of the Tu-154 trying to land when the crash occurred.

Comments posted to the video indicate the accident is actually from the 2009 Tehran air show, when the modified IL-76MD AWACs plane collided in mid-air with an F-5E Tiger II.

In all, seven crewmembers were killed.