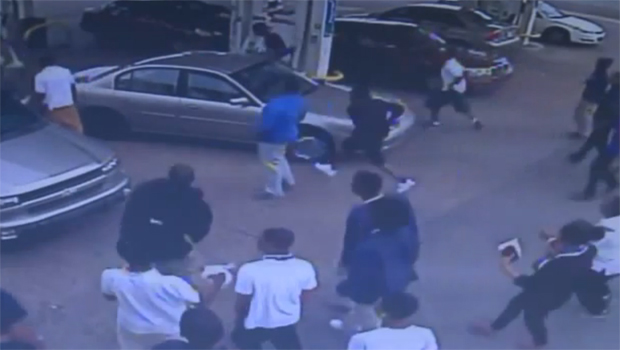 Orrden Williams, Jr., the man seen in the surveillance footage being beaten, told the station that one of the kids "sucker punched" him. He had reportedly been helping an older woman to her car, after saying that she didn't feel safe when the crowd began coming into the parking lot.

"As we get to the car, they are in the parking lot -- throwing up gang signs and putting up a ruckus," Williams told WREG.

After he was punched in the head, he began to rush to his car to protect his baby, according to the station. He also says that he considered using his gun to protect his family.

Police say the baby was not hurt, but Williams' upper body was bruised, reports WREG.

Meanwhile, other customers were inside the store and workers reportedly held the door shut as the teens rushed to the entrance.

Police also say the teenagers damaged Williams' car. It is still not clear what provoked the attack.

Williams wants the teenagers involved cited and taken to juvenile court, according to the station.