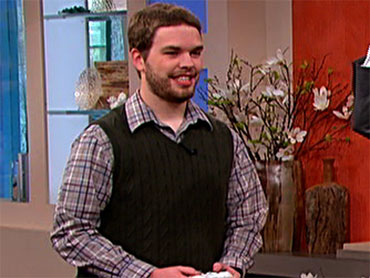 Who knew video games could be so profitable?

An Alabama man is $1 million richer because of his skillful pitching -- in a video game.

Two months ago, Wade McGilberry, 24, of Semmes, Ala., entered a contest to be the first person to pitch a perfect baseball game in the video game "MLB 2K10."

McGilberry told "Early Show" co-anchor Harry Smith he didn't play video games for hours at a time before the contest. He said he only played about a half-hour to an hour every day -- "until his wife (got) home."

And he didn't play sports games. He said he previously played only first-person shooter games, such as "Halo 3" and "Call of Duty."

But that changed when he learned about the contest.

McGilberry said, after he got his wife Katie's permission to compete, he even talked with her about missing work to devote his time to the game.

As it turns out, he didn't have to miss work at all.

McGilberry tried several times to pitch the perfect game, getting stuck repeatedly on the fifth inning. In addition to the stress of playing online, McGilberry had to verify he was playing the game by videotaping his play.

However, after five tries and finally reaching the seventh inning, he knew he was onto something.

He said, "I was thinking, 'I've made it this far, you know, why not just, you know, hit, get everybody one more time.'"

He pitched the perfect game on his sixth try. But ever since, McGilberry has yet to repeat the feat.

McGilberry's reward came as a total surprise. The video game company 2K Games called McGilberry under the subterfuge that he was a "finalist" in the contest.

He explained, "They actually called me on Sunday afternoon and told me they were going to come and they had to check out my Xbox because I was one of the finalists and they had to make sure that I didn't have the Xbox rigged."

But instead, they showed up with an oversized check for $1 million.

McGilberry said his wife was speechless.

The couple plans to pay off their mortgage, and with the money left over, he said they plan to start a family.

McGilberry said, "We were waiting for our finances to get in order to do that."