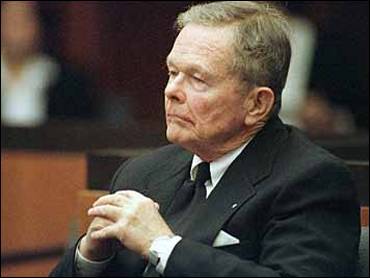 His crimes ruined young lives, and many say he destroyed their faith in the church. But even the victims of defrocked priest John J. Geoghan didn't wish for the violent death he met.

Geoghan molested nearly 150 boys over three decades and became a catalyst for the clergy sex abuse scandal that shook the foundations of the Catholic Church. He allegedly was strangled and beaten Saturday by Joseph L. Druce, a fellow inmate in the maximum security Souza-Baranowski Correctional Center in Shirley.

"Many victims are disappointed," said attorney Mitchell Garabedian, who represents more than 200 alleged victims of Geoghan and other clergy. "They wish Father John Geoghan had time to be in prison to reflect."

Victim Michael Linscott said at first he felt that Geoghan had gotten what he deserved, but then he thought about Geoghan's upcoming abuse trials.

"There was one moment of that kind of a feeling, but then I thought about the victims that are still here that he would have to face had he lived," he said on CBS News' The Early Show. "In my opinion, he got off the easy way."

"I think people in their more calm and balanced state of mind will realize that the state is responsible for executing justice and this is not justice," Boston College theology professor Stephen Pope told CBS News.

Geoghan's abuses cut a wide swath through parishes in the Boston Archdiocese — and he came to symbolize the horrors of pedophile priests and the exhaustive steps church hierarchy would take to keep the allegations under wraps.

"He's never going to hurt anybody again, and at the same time, he still had a lot of penance to do on earth," said Michael Linscott, 45, who claims he was abused by Geoghan from 1967 to 1972 at the St. Paul Parish in Hingham.

Geoghan, 68, was serving a nine- to 10-year sentence for assault and battery on a 10-year-old boy. He'd been in protective custody since being transferred to Souza-Baranowski in April, officials said.

Druce, 37, a reputed member of the neo-Nazi group Aryan Nation, is serving a life sentence for a 1988 murder. He also pleaded guilty to sending fake anthrax from prison to lawyers with Jewish-sounding names and was sentenced to an additional 37 months in prison.

An executive of the state corrections union, Robert W. Brouillette, told The Boston Globe and The Washington Post that Druce followed Geoghan into his cell, then jammed the electronic cell door to prevent guards from opening it. Druce bound Geoghan's hands behind his back with a sheet and gagged him. He then repeatedly jumped from the bed in the cell onto Geoghan's body and beat him with his fists, Brouillette said.

State correction officials declined to comment on the report.

In prison, Druce Smiledge has been nothing but trouble, reports CBS News Correspondent Jim Acosta. A self-proclaimed Neo-Nazi, he once mailed his own feces to the state's attorney general, and just two years ago he sent anthrax hoax letters to lawyers with Jewish last names.

Worcester District Attorney John J. Conte said Druce will be charged with murder. He said Geoghan appeared to have been strangled, though an autopsy was scheduled for Monday.

Geoghan was ordained in 1962, starting a 34-year career that took him to six different parishes. Along the way, he left behind a legacy distinguished only by the trail of allegations of predatory abuse.

He'd seek out boys from broken homes, ingratiate himself with their families, then abuse his young charges during trips to baseball games at Fenway Park, out for ice cream, visits to their homes even in the rectory.

"Geoghan personified the pedophile priest," said Jim Post, president of Voice of The Faithful, a lay reform group formed in the wake of the abuse scandal.