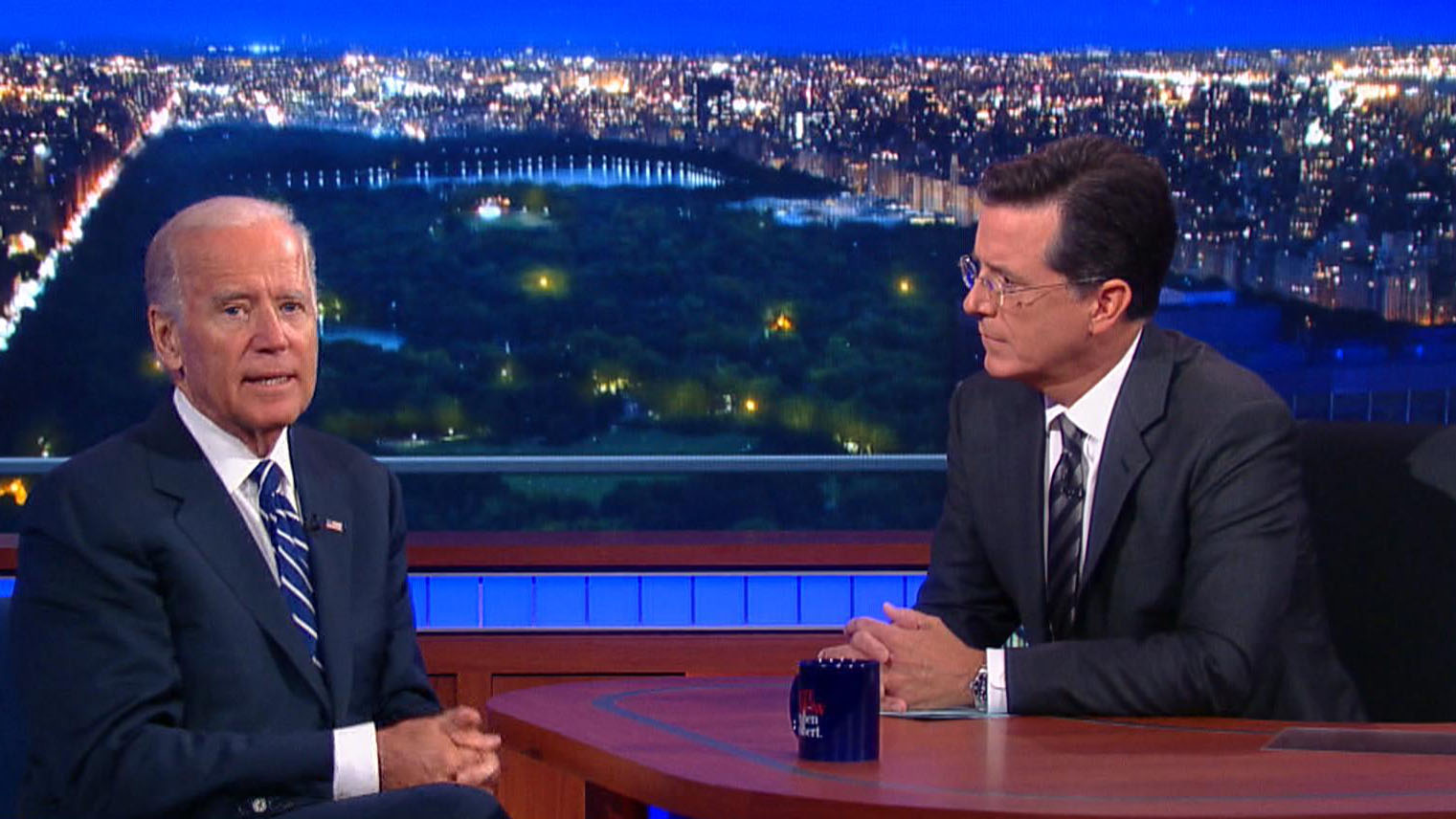 NEW YORK -- During an interview on the third episode of "The Late Show with Stephen Colbert," on Thursday Vice President Joe Biden spoke candidly about his late son Beau, the impact of his son's death, and the lingering question of whether he'll run for president.

Host Stephen Colbert conducted what was mostly a serious interview, and near the end, he asked Biden if he was emotionally prepared to for a campaign.

"I don't think any man or woman should run for president unless, number one, they know exactly why they would want to be president and two, they can look at folks out there and say I promise you have my whole heart, my whole soul, my energy, and my passion.

"And, and, I'd be lying if I said that I knew I was there. I'm being completely honest. Nobody has a right in my view to seek that office unless they are willing to give it 110 percent of who they are."

"I'm optimistic. I'm positive about where we're going. But I find myself...you understand, sometimes it just sort of overwhelms you. I can't..."

Earlier in the interview, the new "Late Show" host praised Biden for being "real," and he said that people had been inspired by the way Biden handled tragedy, offering his condolences on the death this summer of his son, Beau Biden. He asked Biden to tell a story about Beau.

The story the vice president told wasn't a new one, but it seems to be a favorite illustration of his son's character.

"I was a hell of a success. My son was better than me. he was better than me in every way," he said. He remembered his own father's saying, "Never complain and never explain," and he went on to say, "I never once, my word as a Biden, never ever heard my child complain."

A few months before Beau died, the elder Biden remembered Beau said to him "Dad, I know how much you love me. Promise me you're going to be all right."

Colbert also asked about the role of faith in helping him get through the tragedy in his life, and Biden told him that his wife often tapes notes for him on the bathroom mirror, like one he recalled that quoted philosopher Soren Kierkegaard. It read, "Faith sees best in the dark."

The vice president talked about the "enormous sense of solace" the rituals of Catholicism give him. He counts his rosary beads, and "I go to mass and I'm able to be just alone, even in a crowd," Biden said.

"It was going great. All of a sudden, guy in the back yells. Major Beau Biden. Bronze star, sir. Served with him in Iraq," Biden recalled. "I lost it. How can you? That's not - you can't do that."

Colbert wrapped up the interview by urging Biden to run, saying that "It's going to be emotional for a lot of people if you don't run. Your example of suffering and service is something that would be sorely missed in the race."