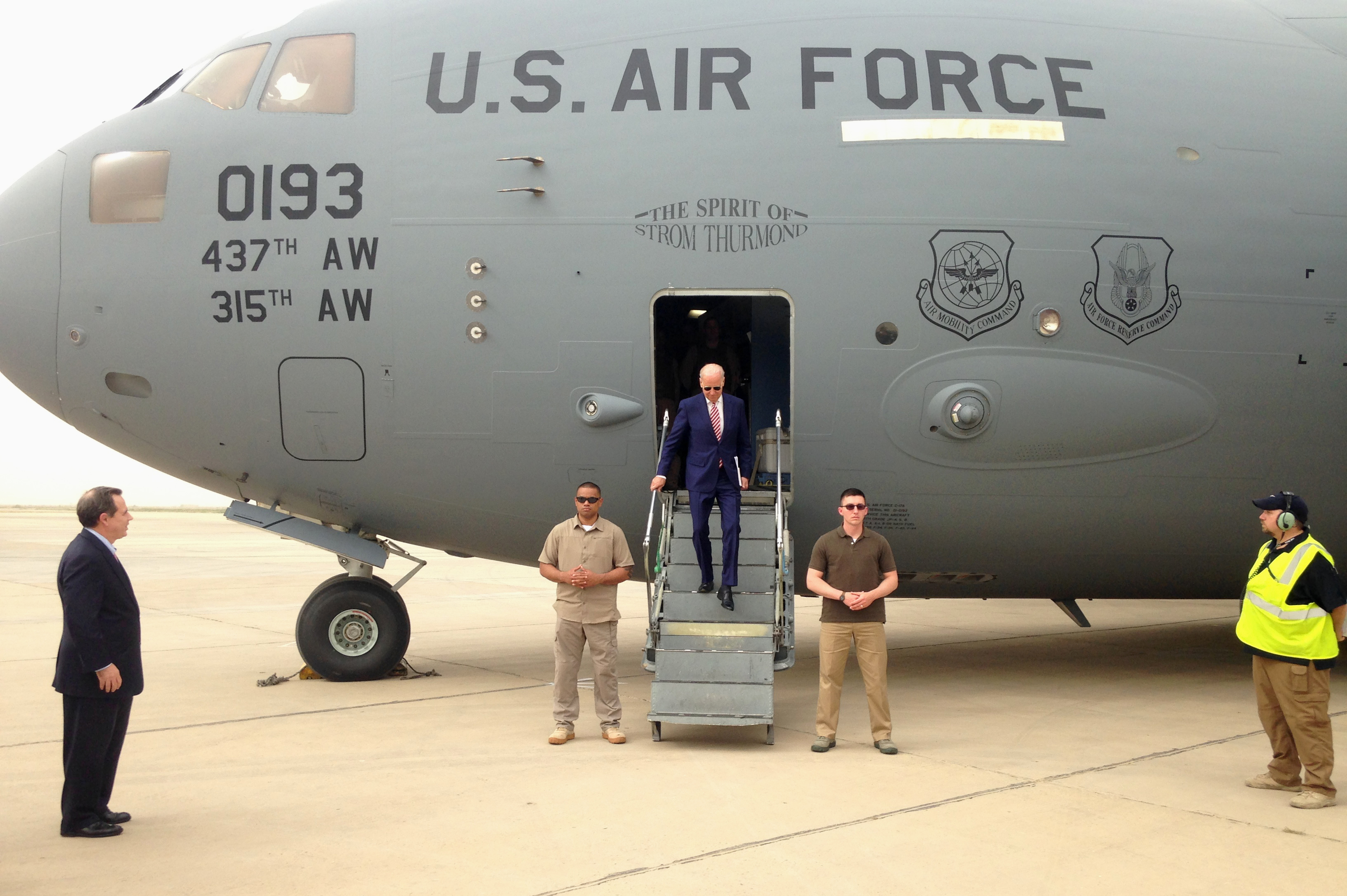 BAGHDAD-- Vice President Joe Biden arrived in Baghdad on Thursday in a surprise visit intended to help Iraqi leaders resolve a political crisis that has hindered efforts to defeat the Islamic State in Iraq and Syria (ISIS).

Biden landed at Baghdad International Airport midday after an overnight flight on a C-17 military transport plane from Washington. He was expected to meet with government officials and stress the need for unity, although the White House did not disclose his itinerary.

"The Vice President will also be discussing steps the international community can take to promote Iraq's economic stability and further regional cooperation. He will also have an opportunity to thank US diplomatic and military personnel for their tremendous service," Biden's spokesperson said in a statement released by the White House.

Biden, wearing aviator sunglasses as he stepped off the plane, was greeted on the tarmac by U.S. Ambasador Stuart Jones and Lt. Gen. Sean McFarland.

Protests and demands for political reforms have paralyzed an Iraqi government already struggling with a troubled economy and violent extremists. The Obama administration has stepped up the U.S. military role with more troops and equipment, but the U.S. worries that infighting in Baghdad is jeopardizing hard-fought gains with President Barack Obama set to leave office in January.

Due to concern for Biden's security, his trip was not announced in advance. Journalists traveling with Biden had to agree to keep it secret until he arrived.

The political turmoil in Iraq grew out of weeks of rallies by followers of influential Shiite cleric Muqtada al-Sadr demanding an end to corruption and mismanagement. Thousands have protested just outside Baghdad's heavily guarded Green Zone, calling for politicians to be replaced by independent technocrats and for Iraq's powerful Shiite militias to be brought into vital ministries.

Prime Minister Haider al-Abadi is a Shiite whom the U.S. considers a welcome improvement over his predecessor, Nouri al-Maliki. Yet al-Abadi's failures to deliver on long-promised reforms and manage sectarian tensions have threatened his ability to lead.

Al-Abadi is caught between Iraqis who are pleading for government accountability and entrenched political groups that are reluctant to give up a patronage system that's widely blamed for squandering Iraq's oil fortunes.

On Tuesday, Iraq's parliament approved half a dozen new Cabinet ministers whom al-Abadi nominated in a gesture to protesters.

Lawmakers have thrown water bottles and punched each other, with some calling for al-Abadi to resign along with the Sunni parliament speaker and Kurdish president. Last month, al-Abadi pulled troops fighting IS on the front lines to protect Baghdad amid the protests. An economic crisis spurred by collapsing oil prices has worsened the problems.

When Obama was in Saudi Arabia last week, he said al-Abadi had been a "good partner." But Obama added that he was concerned about the prime minister's hold on power. Obama said it was critical that Iraq's government stabilize and unite competing factions so it can fight terrorism and revive its economy.

"They've got a lot on their plate," Obama said. "Now is not the time for government gridlock or bickering."

It was precisely because of that bickering that Obama emerged from his meeting with Gulf leaders without the promises of financial support for Iraq's reconstruction that he had sought. Gulf countries preferred to wait and see whether Iraq could get its political act together before agreeing to help.

Aiming to build on recent progress in retaking territory from ISIS, the U.S. this month agreed to deploy more than 200 additional troops to Iraq, bringing the authorized total to just over 4,000, and to send Apache helicopters into the fight. Although the White House has ruled out a ground combat role, Obama's decision puts American forces closer to the front lines to train and support Iraqi forces preparing to try to take back the key northern city of Mosul.

U.S. officials would not put a timeline on reclaiming Mosul but said they expect progress to slow during the summer.

For Biden and Obama, the next nine months represent their final opportunity to position Iraq for a peaceful future before their terms end. Though they came into office pledging to end the war and did so in 2011, U.S. troops returned to Iraq in 2014 amid the rise of ISIS. Obama now acknowledges that his goal of defeating the militants won't be realized during his presidency.

The slow but consistent ramp-up of U.S. military involvement in Iraq, and more recently in Syria, has raised concerns about the extent of the mission, and the risks of another Mideast entanglement. On the other hand, many Obama critics deem his efforts too little, too late. Nearly all of this year's presidential candidates are pledging a more aggressive campaign against ISIS.