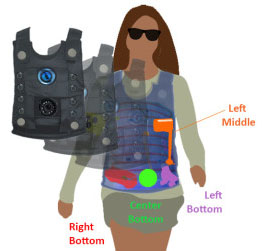 Soon there may be a new wearable tool that can help the visually impaired get around more easily.

The Eyeronman is a vest equipped with sensors designed to detect obstacles.

The device is currently in development by New York-based company Tactile Navigation Tools. It uses the same type of technology found in driverless cars.

"It can alert you to obstacles in your way," Dr. JR Rizzo, company founder and chief medical adviser and associate research scientist at the Rusk Rehabilitation at NYU Langone Medical Center, told CBS News.

Rizzo said his company is in the process of raising money to build a prototype that would be equipped with sensors and emitters like the LIDAR laser used in driverless cars, ultrasound and infrared technology.

The vest would vibrate when the user is approaching an object in their path, giving the person real-time feedback on which direction to go and how to avoid collisions or dangers.

Think of it as a "smartly positioned massager on steroids," Rizzo said.

The company says the Eyeronman could eventually do even more than help the blind and visually impaired.

Rizzo hopes the technology could also be applied to other uses, such as aiding first responders, firefighters, combat soldiers and police move more safely through dangerous environments.