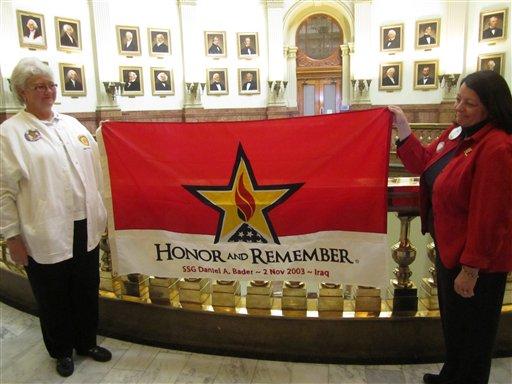 DENVER (AP) - The simple banner is designed to honor those who served and died in the military. But a national campaign to add the red-and-white "Honor and Remember" flag to official U.S. flag displays on military holidays is creating painful divisions among veterans and the relatives of loved ones killed in action.

For lawmakers nationwide, the "Honor and Remember" debate forces an uncomfortable question: Who can say what should be done to honor people who died for the country?

The banner - a red-and-white background with a star, an eternal flame and the words "HONOR AND REMEMBER" - was conceived by a Virginia man, George Lutz, who lost his son in Iraq in 2005.

Lutz has visited all 50 states to promote its display beneath the American flag and the POW/MIA flag adopted by Congress in 1989. Delaware, North Carolina, Oklahoma and Virginia have adopted the banner, and federal legislation to do so is pending for a third consecutive year in Congress.

"It's public recognition of the price of freedom, and I don't think we can do that enough," said Lutz, of Chesapeake, Va., who has gathered signatures of support from countless relatives of fallen service members and many public officials, including governors and members of Congress. Lutz says the campaign helps him mourn his son, Pfc. George Anthony "Tony" Lutz II, killed at age 25.

"It's a great idea," said Rep. Randy Forbes, R-Va., who has sponsored bills in Congress requiring the "Honor and Remember" flag to be flown under the national flag and POW/MIA flag at federal buildings on federal holidays.

"There was no flag that was separate and apart to honor those who had given their lives in the defense and honor of the country," Forbes said.

But many oppose the new banner's display alongside Old Glory.

In Colorado, state senators last week rejected a second attempt to have the "Honor and Remember" flag flown over the state Capitol on Memorial Day and Veterans Day. The decision literally brought tears to the eyes of some on the Senate State Veterans and Military Affairs Committee after hours of emotional testimony from veterans. Dozens in the standing-room-only crowd dabbed their eyes.

"We believe Old Glory is the only flag we want representing us," said Marvin Meyers, former chairman of the Colorado Board of Veterans' Affairs. "We fought for it. We're buried under it."

"We don't need any other flag other than the United States flag - the flag of our country," said Ralph Bozella, a Vietnam veteran and current chairman of the Colorado Board of Veterans' Affairs.

But others argue that the American flag is too multifaceted to simply honor those killed in war. They point out that while the nation observes the POW/MIA flag, fallen veterans don't have a flag of their own.

"I know there are some veterans that are adamantly opposed to it, and I respect that," said Molly Morel of Martin, Tenn., whose son, Marine Capt. Brent Morel, died in Afghanistan.

Molly Morel is president of the nation's largest organization for mothers who have lost children in battle, American Gold Star Mothers, created after World War I. She's a passionate supporter of the "Honor and Remember" flag and has one embroidered with her son's name.

Morel says she doesn't understand why some veterans chafe at including the flag on official displays.

"Does America have too many reminders about the sacrifices? I don't think so," Morel said.

Prominent military historians are skeptical about the new banner. Andrew Wiest, a historian at the University of Southern Mississippi who specializes in the Vietnam War, says the POW/MIA flag was adopted in "a fit of national conscience and remorse" over how Vietnam veterans were treated when they returned home.

"The national flag is supposed to represent everything, the sacrifice of all veterans," Wiest said.

The debate is giving public officials an uncomfortable choice between veterans' groups and grieving relatives. The national American Legion and Veterans of Foreign Wars groups haven't taken positions on the banner, though many state chapters oppose its inclusion.

"This is gut-wrenching," said Colorado Sen. Rollie Heath, a Boulder Democrat who cast the deciding vote not to fly the "Honor and Remember" flag above the state Capitol in Denver.

"I happen to believe the American flag is the flag we ought to fly," he said. "Do I feel good about it? No. This has caused a rift in the veterans' community. And that's something that pains all of us."