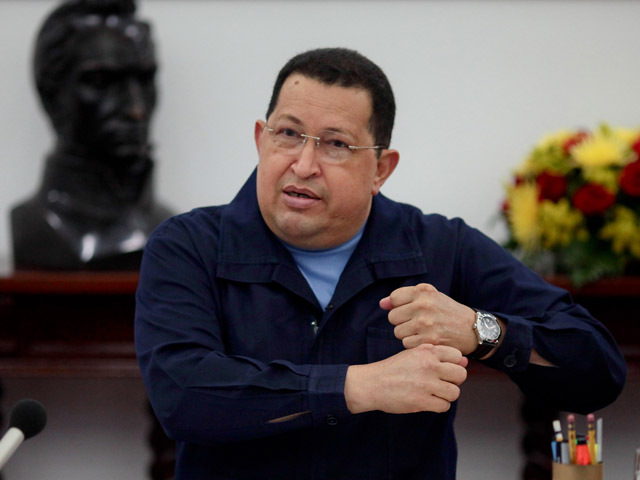 (AP) CARACAS, Venezuela - Venezuelan President Hugo Chavez traveled to Cuba on Saturday for another round of cancer treatment, saying he will be in Havana for several days and then return home.

Chavez boarded the presidential jet on Saturday night accompanied by one of his daughters. His aides and military chiefs saw him off at the airport.

He said during an earlier speech to supporters that he was traveling to Havana for a second round of radiation after recent surgery to extract a second cancerous tumor in his pelvic area. Chavez had another tumor removed from the same place in June.

The 57-year-old leftist president, in office since 1999, has vowed to overcome cancer to win another six-year term in the Oct. 7 election.

Chavez has not identified the type of cancer, nor the precise location where the tumors were located. He has said he is choosing to undergo treatment in Cuba because it's where his cancer was originally diagnosed and where his surgeries have been carried out.

He regularly has met with close friend Fidel Castro as well as his brother President Raul Castro while undergoing treatment.

Chavez said that after his second round of five daily sessions of radiation, he expects to return to Caracas on Wednesday or Thursday.

He has said he expects to be traveling to and from Cuba for the treatments in the next several weeks.