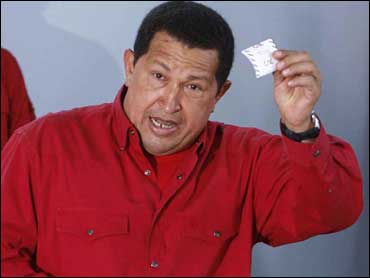 Hugo Chavez sought to cement his power and end term limits Sunday in a contentious vote that could let him hold on to the presidency for life.

Voters turned out in high numbers to decide on sweeping constitutional changes seen as a critical test for a flamboyant leader bent on turning South America's top oil exporter into a socialist state.

While opponents fear a plunge toward dictatorship, backers have full faith that Chavez will use the reforms to deepen grass-roots democracy and more equitably spread the wealth.

"I'm very sure that everything is going to go very well," Chavez said after voting, holding his newborn grandson in his arms. "We're going to accept the results, whatever they are."

Yet an emboldened opposition and violent clashes in recent weeks prompted fears of bitter conflict if the vote is close, as some pollsters predict. Lines snaked outside many polling stations, and Information Minister Willian Lara said turnout was "massive" countrywide.

The changes would create new forms of communal property, let Chavez handpick local leaders under a redrawn political map, permit civil liberties to be suspended under extended states of emergency and allow Chavez to seek re-election indefinitely. Otherwise, he cannot run again in 2012.

The retired blue jeans maker, who emigrated from Cuba in 1961, said that although Chavez's revolution is peaceful compared to that of Fidel Castro, "we've been violated all around" by the Venezuelan leader's progressive consolidation of power.

Across town, in a pro-Chavez slum, Jorge Blanco, a 40-year-old motorcycle taxi driver, said Chavez "is giving power to the people" through the reforms. "He opened that little door and now we're free." Of the wealthy elite, Blanco said: "What they fear is losing power."

Chavez has warned opponents he will not tolerate attempts to stir up violence, and threatened to cut off oil exports to the United States if Washington interferes. The United States is the No. 1 buyer of Venezuelan oil.

While his government touted polls showing Chavez ahead, surveys cited by the opposition indicated strong resistance, unfamiliar for a leader who easily won re-election last year with 63 percent of the vote.

Chavez has accused the U.S. government of plotting to thwart the legitimate victory he predicted.

U.S. Sen. Carl Levin, who chairs the Armed Services Committee, denied any U.S. attempts to undermine Chavez. "We're not seeking to destabilize him. His policies, his efforts at dictatorship, to amend the constitution so he can stay there for life, that is what's destabilizing Venezuela, not our policies," he told CNN.

His opponents have questioned the National Electoral Council's impartiality, however, especially after Chavez named its former chief, Jorge Rodriguez, vice president in January.

About 100 electoral observers from 39 countries in Latin America, Europe and the United States were on hand, the electoral council said. Absent were the Organization of American States and the European Union, which have monitored past votes.

All was reported calm during voting but 45 people were detained, most for committing ballot-related crimes like "destroying electoral materials," said Gen. Jesus Gonzalez, chief of a military command overseeing security.

Cecilia Goldberger, a 56-year-old voting in affluent eastern Caracas, said Venezuelans were being hoodwinked and don't really understand how Chavez's power grab will affect them.

She resented the pre-dawn get-out-the-vote tactics by Chavistas, including fireworks and reveille blaring from speakers mounted on cruising trucks.

"I refuse to be treated like cattle and I refuse to be part of a communist regime," the Israeli-born Goldberger said, adding that she and her businessman husband hope to leave the country.

Chavez sought to capitalize on his personal popularity ahead of the vote.

He is seen by many as a champion of the poor who has redistributed more oil wealth than any other leader in memory. Chavez, 53, says he will stay in power only as long as Venezuelans keep re-electing him -- but has added that might be until 2050, when he would be 95 years old. The reforms would also grant Chavez control over the Central Bank and extend presidential terms from six to seven years.

Many Chavez supporters say he needs more time in office to consolidate his unique brand of "21st century socialism," and praise other proposed changes such as shortening the workday from eight hours to six, creating a social security fund for millions of informal laborers and promoting communal councils where residents decide how to spend government funds.

Tensions have surged in recent weeks as university students led protests and occasionally clashed with police and Chavista groups. One man was shot dead Monday while trying to get through a road blocked by protesters.

The opposition called for close monitoring of an outcome they predict will be close.

Some 140,000 soldiers and reservists were posted for the vote, the Defense Ministry said.

Electoral council chief Tibisay Lucena called the vote "the calmest we've had in the last 10 years."

More than 16 million Venezuelans were registered to vote, including some living abroad who cast ballots at embassies in places from Nicaragua to Germany.