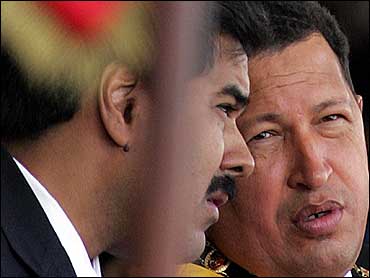 Venezuela's foreign minister on Tuesday lodged a protest with the U.S. ambassador over his temporary detainment during the weekend at a New York airport.

The formal protest came after President Hugo Chavez suggested Venezuela would respond with "equal treatment" if the incident were repeated.

Nicolas Maduro met with U.S. Ambassador William Brownfield and submitted a letter expressing his government's "energetic protest over the action taken by immigration officials of the U.S. government." He demanded that Washington publicly make amends for the "unfriendly, reprehensible and unacceptable" incident.

Maduro says authorities at John F. Kennedy International Airport tried to frisk him and threatened to handcuff him Saturday as he prepared to catch a flight after attending the U.N. General Assembly.

In his comments earlier in the day, Chavez also slammed U.S. officials for suggesting that Venezuela would make the U.N. Security Council unworkable if the South American nation were to win its bid against U.S.-backed Guatemala for a rotating council seat.

"It's more evidence of how the U.S. government sees itself as the owner of the world," Chavez told reporters at the presidential palace. "It's the United States that should leave the Security Council."

The U.S. government has sought to block Venezuela's bid for a seat, and the race is to be decided by a secret-ballot U.N. vote next month.

On the floor of the United Nations last week, Chavez called President Bush "the devil," increasing already tense relations between Caracas and Washington. The U.S. government has often criticized Chavez, saying he is a destabilizing force in Latin America and questioning his commitment to democracy.

Chavez has called the U.S. government the greatest threat facing the world, pointing to the war in Iraq and U.S. invasions of countries from Grenada to Panama.

Secretary of State Condoleezza Rice warned in an interview with The Wall Street Journal on Monday that Venezuela would make the Security Council ineffective if it wins a seat.

"It would mean the end of consensus on the Security Council. Now, that's a serious matter," Rice was quoted as saying.

Referring to the Venezuelan leader's U.N. speech, Rice said, "I think Hugo Chavez did himself no good with that speech. And whatever press attention it got, it also got the attention of a lot of people who worry about the responsibilities of the Security Council."

U.S. officials have apologized to Venezuela over the incident involving Maduro at the airport Saturday. The foreign minister said he was detained for 90 minutes in what he called a flagrant violation of international law and his diplomatic immunity.
Maduro said when one official ordered him to go to another room for a strip search, he refused. He said authorities at one point ordered him and other officials to spread their arms and legs and be frisked, but he said they forcefully refused. He said officers also threatened to handcuff him.

However, U.S. Department of Homeland Security officials have denied that Maduro was mistreated, and U.S. ambassador to the United Nations John Bolton on Monday called Maduro's protest "street theater" and propaganda.

Chavez praised Maduro for "defending the dignity of all of us" by refusing to let the officials harass him or subject him to additional searches.

"The great truth is that the foreign minister was coming back and was abused and disrespected," Chavez said.