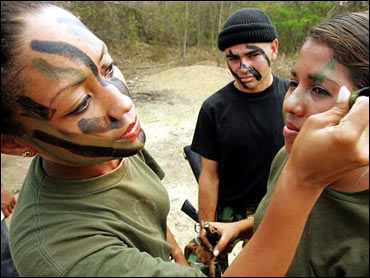 Now he's begun training a civilian militia as well as the Venezuelan army to resist in the only way possible against a much better-equipped force: by taking to the hills and fighting a guerrilla war.

Supporters of the president, a former paratroop commander, are increasingly taking up his call. Chavez wants 1 million armed men and women in the army reserve, and 150,000 have already joined, surpassing the regular military's force of 100,000. Now Venezuelans are also organizing neighborhood-based militia units for Chavez's Territorial Guard.

Critics of Chavez say the real goal of the mobilization is to create the means to suppress internal dissent and defend Chavez's presidency at all costs. Thousands of Territorial Guard volunteers - housewives, students, construction workers - are undergoing training, earning $7.45 per session.

"We're going to be a country of soldiers," declares Roberto Salazar, an unemployed 49-year-old, after scrambling under barbed wire, wading through a mud trench and skirting burning tires with other volunteers.

Venezuela's citizen-soldiers come mostly from the slums where Chavez draws his fiercest support. They train on weekends, learning how to handle assault rifles and run obstacle courses through clouds of tear gas.

"Venezuelans need to know how to be military people so that we can defend our fatherland and our president," Salazar says.

Chavez insists the plotters of a 2002 coup that briefly unseated him had Washington's blessing. The United States quickly recognized the interim leaders; U.S. intelligence documents indicate the CIA knew dissident military officers were plotting against Chavez.

Chavez now says all Venezuelans must be prepared for a "war of resistance," and has noted that the hills around Caracas provide excellent cover.

U.S. troops would "bite the dust," he maintains, if they try to oust him and seize Venezuela's vast oil reserves. Top defense officials say Venezuela must prepare for "asymmetrical" war - military parlance for using non-conventional means against a traditional army.

The reservists are to be issued some of the army's older Belgian FAL assault rifles once Venezuela receives 100,000 new Kalashnikovs from Russia - approximately one for every regular soldier.

U.S. officials express concern that Chavez could be trying to export revolution. Chavez calls that an invention, and says the weapons will be needed for the 1 million Venezuelans he wants to arm. The civilian militias will not be issued firearms but their commanders say weapons would be made available in an emergency.

"The military devotion to Chavez is one of two keys to Chavez's survival. The other is the devotion of the poor," says Larry Birns of the Washington-based Council on Hemispheric Affairs. "It's an act of desperation to form an armed civilian militia. He may have reached that point where he feels a faction of the military is untrustworthy."

Rather than trying to topple Chavez with an invasion, it's more likely Washington is trying to undermine him by courting potential rivals within the military, Birns says.

Chavez has in turn sought to reward loyalty, granting handsome pay raises throughout the military. He expelled a U.S. military attache in February, accusing him of espionage. Washington expelled a Venezuelan diplomat in retaliation and has denied any attempts to overthrow Chavez.

Chavez reminds his people the United States invaded Grenada and Panama to topple regimes it considered hostile. In both cases, resistance quickly crumbled.

Cuba's defeat of a CIA-trained force at the Bay of Pigs in 1961 is the model Chavez wants to follow.

Chavez marked that battle's 45th anniversary on Tuesday, appearing with Cuban Foreign Minister Felipe Perez Roque and describing the 2002 coup as Venezuela's own Bay of Pigs. Chavez said his military had detected a U.S. aircraft carrier and submarines off the coast and U.S. planes and helicopters over land at the time. And he criticized U.S. naval exercises in the Caribbean this month as another threat to both Venezuela and Cuba.

"We aren't afraid of them, and if they decide to return we're going to defeat them," he said.

Chavez also recently said the National Guard has even enlisted an army of 500 Indians to defend the country with poison-tipped arrows. He added: "If they had to take a good shot at any invader, you'd be done for in 30 seconds, my dear gringo."