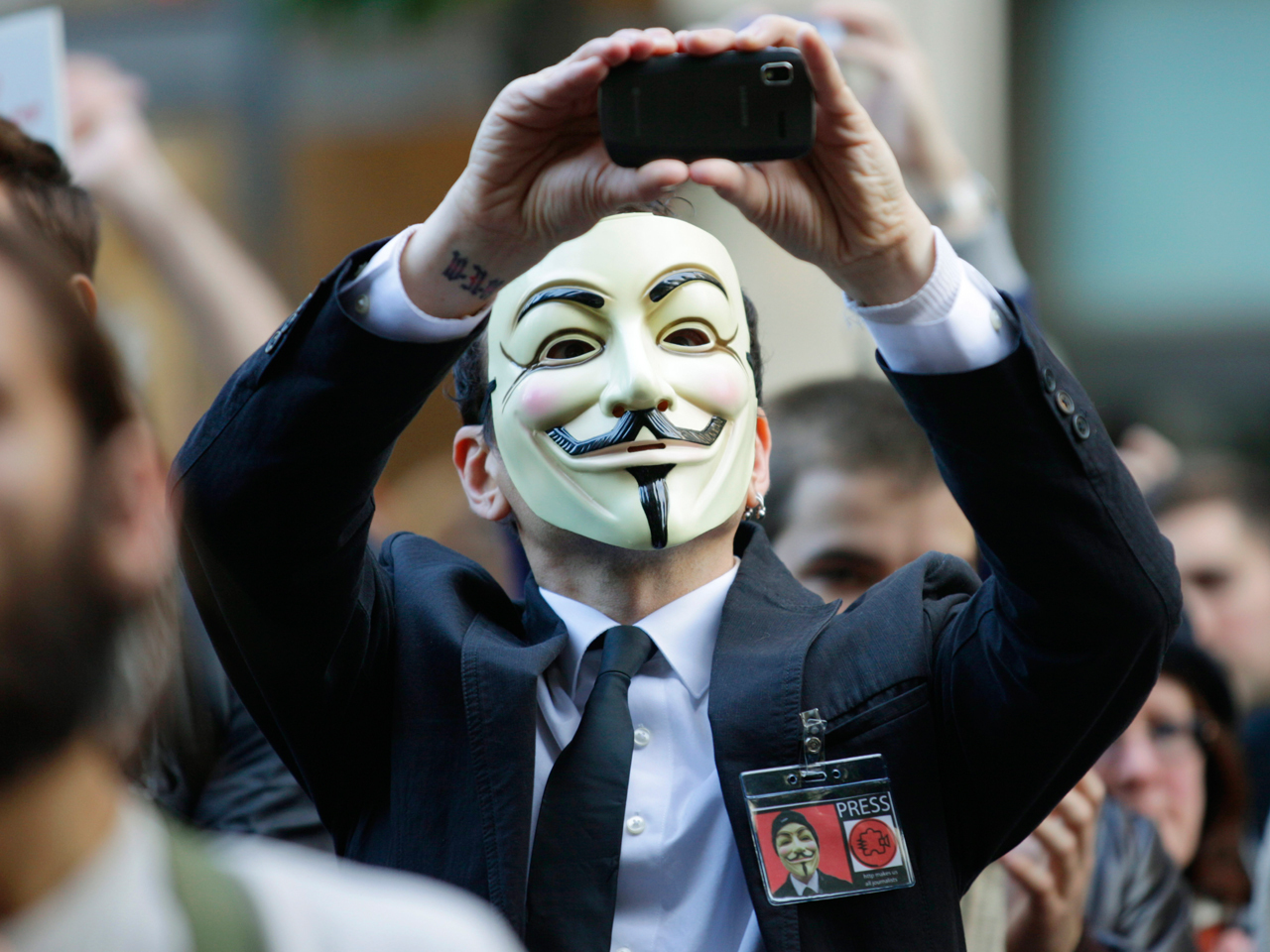 (CBS/AP) NEW YORK - Look at a photo or news clip from around the world of Occupy protests and you'll likely spot a handful of demonstrators wearing masks of a cartoon-like man with a pointy beard, closed-mouth smile and mysterious eyes.

The mask is a stylized version of Guy Fawkes, an Englishman who tried to bomb the British Parliament on Nov. 5, 1605.

"They're very meaningful masks," said Alexandra Ricciardelli, who was rolling cigarettes on a table outside her tent in New York's Zuccotti Park two days before the anniversary of Fawkes' failed bombing attempt.

"It's not about bombing anything; it's about being anonymous - and peaceful."

To the 20-year-old from Keyport, N.J., the Fawkes mask "is about being against The Man - the power that keeps you down."

But history books didn't lead to the mask's popularity: "V for Vendetta" did.

The nearly 30-year-old graphic novel, which became a movie in 2005, features a violent, anarchist antihero known as "V," who fashions himself as a modern Guy Fawkes. His rebellion against a fascist government has become a touchstone for young protesters in mostly western countries.

While Warner Brothers holds the licensing rights to the Guy Fawkes mask, several protesters said they were using foreign-made copies to circumvent the corporation.

Yet whether the inspiration is the comic, the movie or the historical figure, the imagery - co-opted today by everyone from Wikileaks founder Julian Assange to the hacker group Anonymous - carries stronger connotations than some of the Occupy protesters seem to understand.

While Fawkes' image has been romanticized over the past 400 years, he was a criminal who tried to blow up a government building. It would be hard to imagine Americans one day wearing Timothy McVeigh masks to protest the government or corporate greed.

Lewis Call, an assistant history professor at California Polytechnic in San Luis Obispo, said the masked protesters are adopting a powerful symbol that has shifted meaning through the centuries.

"You can seize hold of it for any political purpose you want," he said. "That's the real power of it."

Fawkes was a Catholic insurrectionist who was executed for the bombing attempt. In the years immediately following his execution, Nov. 5 was England's official celebration for defeating Fawkes, said Call, who has written about the nexus of Fawkes, "V for Vendetta" and modern-day protests.

Call said over the next three centuries, people in England started using Fawkes' image in different ways. Some used Fawkes as a symbol for putting limits on state power. Others held him up as a freedom fighter.

Then came Alan Moore's comic book, a nihilistic story set in a futuristic England. And the movie. People began thinking of him as a libertarian or even anarchist hero.

"Gradually over the centuries, the meaning of Guy Fawkes has dramatically changed," said Call. "The reputation of Guy Fawkes has been recuperated. Before he was originally seen as a terrorist trying to destroy England. Now he's seen more as a freedom fighter, a fighter for individual liberty against an oppressive regime. The political meaning of that figure has transformed."

Nearly two years after the film "V for Vendetta" was released, the hacker group Anonymous wore the Guy Fawkes masks depicted in the movie during protests against the Church of Scientology. Then came Wikileaks and the Occupy movement.

At Zuccotti Park in New York, the Guy Fawkes masks have been worn over the past month by Occupy protesters ranging from self-proclaimed anarchists to drummers to those impersonating "zombie" bankers. Few wore them Thursday afternoon because of the arrests of masked activists. But they weren't gone - just hidden.

One was in the left hand of 32-year-old Jason J. Cross - right under a protest sign. He had 20 more stashed in his tent, to be sold at $5 apiece.

"The origins of this mask comes from the idea of rising up against the government," he said. "Guy Fawkes represents the fact that the people have the real power."

A man at the Occupy London protests on a recent day said the mask has become a potent symbol.

"It's unifying the world under one symbol," said the 33-year-old man who asked not to be named because he claimed to be a member of a group accused of hacking into government and corporate computer systems.

"People hide behind the masks, put the masks on and their identity is hidden. Therefore they can do a lot more than they would if they didn't have the masks," he said, after emerging sleepy-eyed from his tent.

The London protester said his brethren are trying to counter Warner Bros.' control of the imagery.

He claims that Anonymous UK has imported 1,000 copies from China, and the distribution goes "straight into the pockets of the Anonymous beer fund rather than the Warner Brothers. Much better."

Hudson Williams Eynon, a protester in Seattle's Westlake Plaza, said the mask is not the only corporate product the Occupy movement is using. Smart phones, cameras and Internet service are used to organize. It is something unavoidable, he said.

"There's a lot of inherent ironies in protesting corporations in a corporate world," Williams Eynon said in early October.