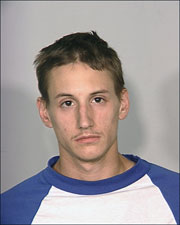 (CBS/AP) LAS VEGAS - Jonathan Weaver had to make a choice. The Las Vegas man got it wrong.

Weaver, who bound and gagged his girlfriend's two toddlers and left them in a garage - so he could go watch a televised basketball game - has been sentenced to two to six years in prison.

The Las Vegas Sun reports that the 22-year-old Weaver apologized for the June 2009 incident, and his public defense lawyer called his remorse genuine during Tuesday's sentencing.

Weaver pleaded guilty in January to two counts of child abuse and the use of a deadly weapon in the commission of a crime. His plea avoided trial on six felony charges including attempted murder and kidnapping.

Despite Weaver's criminally bad judgment, he will be eligible for parole next month. That's because he has already served nearly two years in the Clark County jail, according to the judge in the case.