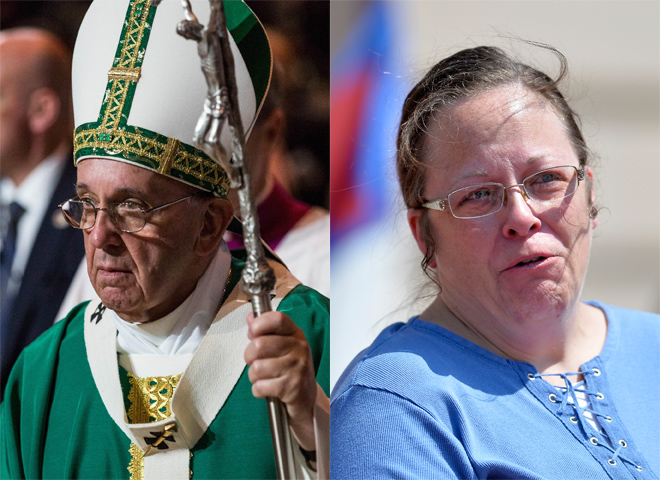 VATICAN CITY - The Vatican on Friday distanced Pope Francis from Kim Davis, the focal point in the gay marriage debate in the U.S., saying she was one of dozens of people the pope greeted in the U.S. and that their encounter "should not be considered a form of support of her position."

After days of confusion, the Vatican issued a statement Friday clarifying the circumstances of Francis' Sept. 24 encounter with Davis, a Kentucky county clerk who went to jail for refusing to issue same-sex marriage licenses.

In a statement, the Vatican spokesman, the Rev. Federico Lombardi, said Francis met with "several dozen" people at the Vatican's embassy in Washington just before leaving for New York.

Lombardi said such meetings are par for the course of any Vatican trip and are due to the pope's "kindness and availability." He said the pope only really had one "audience" in Washington: with former students and his family members.

"The pope did not enter into the details of the situation of Mrs. Davis, and his meeting with her should not be considered a form of support of her position in all of its particular and complex aspects," Lombardi said.

Fr. Tom Rosica, and assistant to Lombardi, told CBS News that the meeting was arranged solely by the nuncio.

The Liberty Counsel, an organization that actively opposes gay rights, disputes that the meeting was unsolicited by the Vatican.

The Liberty Council said in a statement that Archbishop Carlo Maria Vigano personally spoke with Kim Davis about the invitation to meet with the pope during his trip to the United States. "The private meeting request was unsolicited and facilitated by Vatican officials," says the statement from Liberty Counsel.

Davis is an Apostolic Christian, spent five days in jail for defying a series of federal court orders to issue same-sex marriage licenses after the Supreme Court legalized gay marriage across the country.

A judge ultimately freed Davis on the condition she not interfere with her deputies issuing the licenses. When Davis returned to work, she confiscated the marriage licenses and replaced them with new ones saying they were issued not under the authority of the county clerk, but "pursuant to federal court order."

However, Davis' lawyer, Mat Staver, told The Associated Press that the Vatican initiated the meeting as an affirmation of her right to be conscientious objector.

"We wouldn't expect the pope to weigh in on the particulars of any case," Staver said Friday.

He said Vatican personnel initiated the meeting on Sept. 14, the day she returned to work, saying the pope wanted to meet her. He said Vatican security picked up her and her husband from their hotel and told her to change her hairdo so she wouldn't be recognized since the Vatican wanted the meeting kept secret.

Staver disputed a Vatican spokesman's claims that the pope only met Davis in a receiving line. He said the couple was in a separate room with Francis and Vatican personnel.

Davis said earlier this week that she and her husband met briefly with the pope at the Vatican's nunciature in Washington and that he encouraged her to "stay strong."

"Just knowing that the pope is on track with what we're doing and agreeing, you know, it kind of validates everything," she told ABC.

The Vatican statement made clear the pope intended no such validation.

News of the audience sent shockwaves through the U.S. church, with Davis' supporters saying it showed the pope backed her cause and opponents questioning whether the pope had been duped into meeting with her.

Initially the Vatican only reluctantly confirmed the meeting but offered no comment.

On Friday, Lombardi met with Francis and issued a fuller statement to "contribute to an objective understanding of what transpired."

He declined to say who invited Davis into the nunciature or what the pope knew of the case ahead of time. Such encounters are arranged by the Vatican ambassador and his staff, not the pope's delegation or the U.S. bishops' conference.

An assistant to Lombardi, the Rev. Thomas Rosica, said he believed the pope was unaware of Davis or the implications of the meeting.

"I don't think it's a matter of being tricked as of being fully aware of the situation and its complexities," he said. "I don't think anyone was willfully trying to trick the pope, and at the same time nor was the pope briefed properly on who was he meeting. He wasn't properly briefed on the person or the impact of such a visit."

From the start of his six-day tour, Francis encouraged Americans to preserve religious freedom, which he called "one of America's most precious possessions." But he listed it among many other issues, including immigration, climate change and the death penalty.

Francis firmly upholds church teaching that marriage is between a man and woman, but he did not focus on the debate over same-sex marriage during his visit, at one point telling the U.S. bishops to avoid "harsh and divisive" language despite the challenges they face in society.

As he left the country, Francis told reporters who inquired that he did not know Davis' case in detail, but he defended conscientious objection as a human right.

"It is a right. And if a person does not allow others to be a conscientious objector, he denies a right," Francis said.