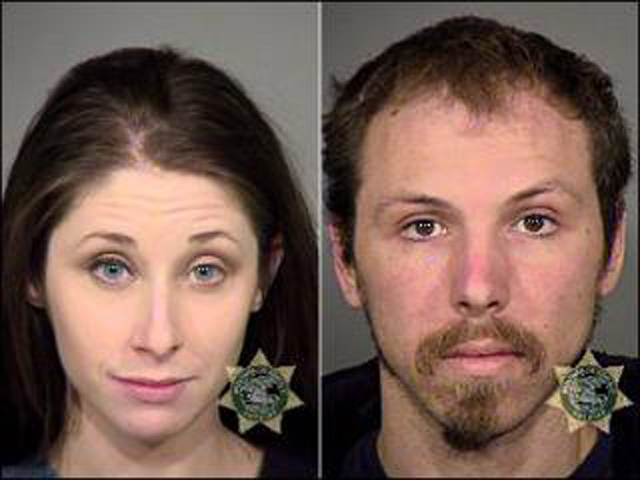 (CBS/KPIC) PORTLAND, Ore. - Some Valentine's Day "role-playing" ended up in jail time Tuesday when a boyfriend and girlfriend were arrested and charged with disorderly conduct after an officer responded to a report of a naked woman bound in the back of a car with duct tape covering her mouth.

CBS affiliate KPIC reports a Portland Police spokesman said around 12:35 p.m. officers got a call that a naked woman had been tied up and gagged.

Sgt. Pete Simpson said a witness told police that the man driving the car "seemed hazy," and that the man told him they were "just having some fun."

Fox News reports at least nine police cars then fanned out across the area, looking for the vehicle.

An officer eventually found the car and stopped a man seen walking away, Simpson said. Police noticed the naked woman bound in the back of a car.

Nikolas Harbar, 31, told police he and his girlfriend, Stephanie Pelzner, 26, were participating in some role-playing for Valentine's Day. Pelzner said she was voluntarily naked and tied up, according to a police report.

Officers arrested the couple on charges of disorderly conduct in the second degree. They were both taken to the Multnomah County Jail.

Police said they had no way of knowing the nature of the incident.

"You can't do things that are going to create a public alarm," Simpson said. "When it starts to affect other people and the public, something like this is not okay."

"Role-play all you want," he said. "But when you do something that is going to generate a 911 call you should probably do it at home."