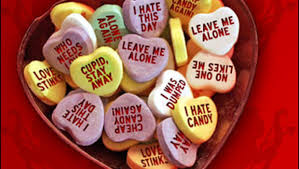 ATLANTA - A sheriff in northeastern Georgia said he was canceling Valentine's Day because of the bad weather, telling men they were off the hook for the romantic gifts and wooing their partners may be expecting.

Sheriff Scott Berry in Oconee County took to Facebook to post his "decision" after an ice storm slammed Georgia on Wednesday.

Men, he wrote, "are exempt from having to run out and buy lottery scratchers and Hershey bars from the corner stores" until next Tuesday. (Quite the romantic, huh?)

Actually, though, the post was all in fun and was shared more than 1,500 times.

Still, it apparently did anger one man who called the sheriff's office Friday from a Michigan area code to protest the cancellation of Valentine's Day, explaining that snow up north isn't a big deal.

Crimesider sent out a search team to look for his sense of humor....