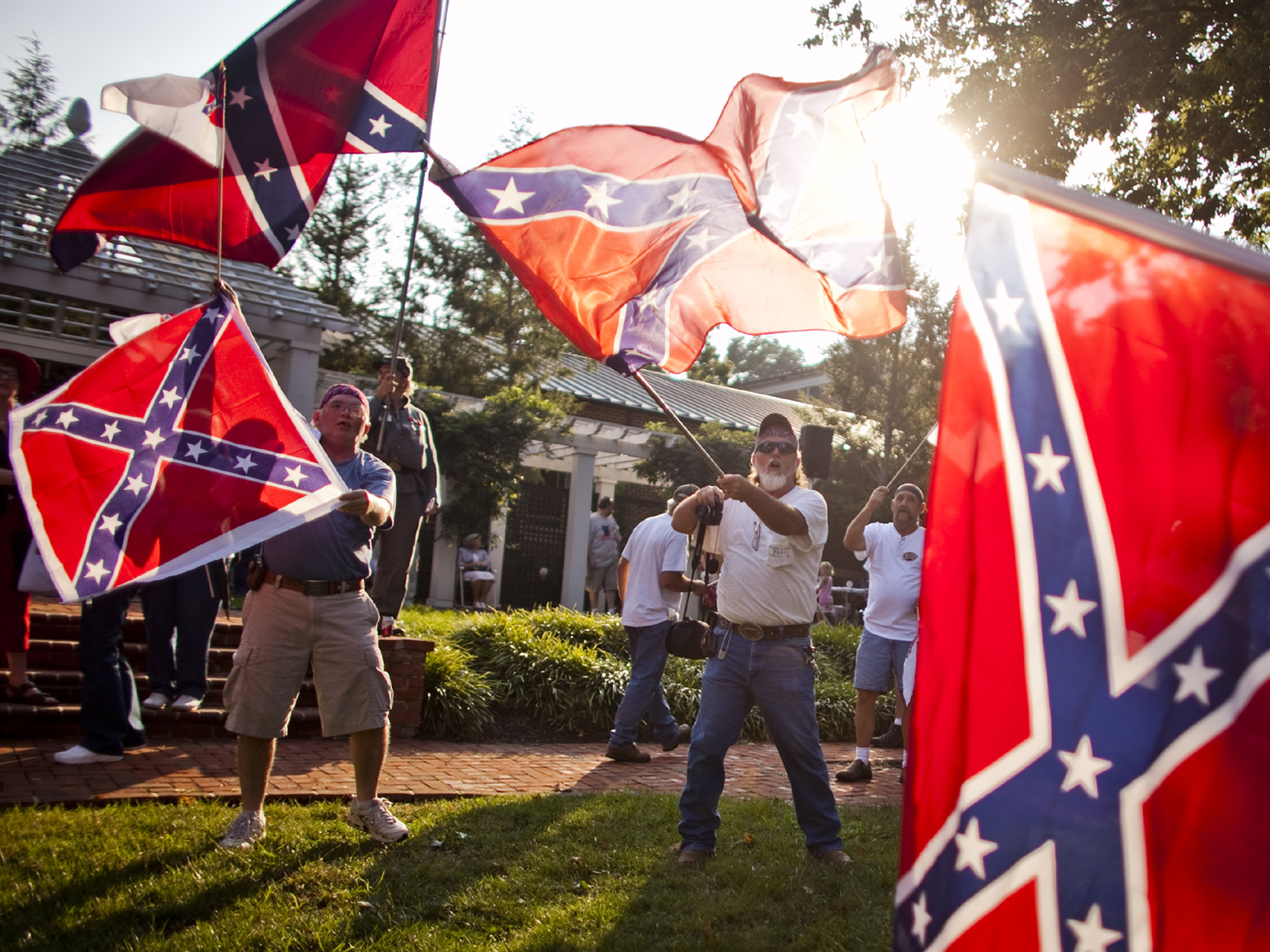 LEXINGTON, Va. - Officials in the rural Virginia city where Robert E. Lee and Thomas "Stonewall" Jackson are buried voted late Thursday to prohibit the flying of the Confederate flag on city-owned poles.

After a lively 2 1/2-hour public hearing, the Lexington City Council voted 4-1 to allow only U.S., Virginia and city flags to be flown. Personal displays of the Confederate flag are not affected. The Sons of Confederate Veterans, whose members showed up in force after leading a rally that turned a downtown park into a sea of Confederate flags, vowed to challenge the ordinance in court.

Some speakers during the meeting said the ordinance was an affront to the men who fought in the Civil War in defense of the South. One speaker stayed silent during his allotted three minutes, in memory of the Civil War dead.

But many speakers complained that the flag was an offensive, divisive symbol of the South's history of slavery and shouldn't be endorsed by the city of 7,000 people.

"The Confederate flag is not something we want to see flying from our public property," said city resident Marquita Dunn, who is black. "The flag is offensive to us."

Most residents who spoke, both blacks and whites, opposed the ordinance. But H.K. Edgerton, the former president of the NAACP chapter in Asheville, N.C., said he supported flying the Confederate flag because he wanted to honor black Confederate soldiers. Edgerton, who is black, wore a T-shirt emblazoned with images of those black soldiers.

"What you're going to do in banning the Southern cross is wrong. May God bless Dixie," he said, amid some gasps from the audience.

Before the rally, ordinance opponents rallied in the city park, then marched to the hearing under a parade of Confederate flags.

"I am a firm believer in the freedom to express our individual rights, which include flying the flag that we decide to fly," said Philip Way, a Civil War re-enactor dressed in a Confederate wool uniform despite the summer temperatures. "That's freedom to me."

Mimi Knight, watching from a wrought iron fence as the flags passed, said she thought the city ordinance seemed too restrictive, noting that it also extended to flags from Virginia Military Institute and Washington and Lee University. Both colleges are in the city.

"These are the things that make Lexington what it is," said Knight, who didn't participate in the rally. "The Confederate flag is part of our heritage."

The Sons of Confederate Veterans organized the "Save our Flags" gathering, which offered free hot dogs and blue grass music. Speakers addressed the crowd amid supportive shouts of "Amen." A promotional flyer depicted Lee with a tear rolling down his cheek.

City Manager T. Jon Ellestad noted that the ordinance only affected city property and wasn't specifically aimed at the Confederate flag. "They can carry their flags anywhere they want," he said.

The city received hundreds of complaints in January, the last time Confederate flags were planted in holders on light poles, to mark Lee-Jackson Day, a state holiday. People complained "that displaying the Confederate flag is very hurtful to groups of people," Ellestad said. "In their mind, it stands for the defense of slavery."

Such complaints convinced city leaders that they should have clear guidelines governing the flying of flags and banners on light poles, Ellestad said.

But heritage groups like the Sons of Confederate Veterans argued that restrictions on the flying of the Confederate flag in Lexington are especially painful because of the two military leaders' strong ties here.

The NAACP launched an economic boycott of South Carolina in 1999 about the Confederate flag that flew atop the Statehouse dome and in the chambers of the House and Senate. A compromise in 2000 moved the flag to a monument outside the Statehouse. The group's president says the flag is a symbol of slavery and segregation.

Some speakers at Thursday's hearing said they, too, would boycott the city, which banks heavily on its Confederate history to attract tourists.

Jackson taught at VMI before the Civil War, where he became widely known as "Stonewall" after the first Battle of Manassas. He died in 1863 from wounds suffered at Chancellorsville along with pneumonia, and is buried in Lexington, according to the website for the Stonewall Jackson House.

Lee, who led Confederate forces during the Civil War before surrendering at Appomattox in 1865, became president of what is now Washington and Lee, where he is buried.

"By all means they should be honored in their hometown," said Brandon Dorsey, commander of Camp 1296 of the Stonewall Brigade of the Confederate Veterans. "I look at the flag as honoring the veterans."

This is not the first time that Lexington, at the southern end of the Shenandoah Valley, has clashed with the Sons of Confederate Veterans.

The city tried nearly 20 years ago to ban the display of the Confederate flag during a parade honoring Jackson. The American Civil Liberties Union, which successfully defended the group's bid to carry the flag, is closely watching this dispute from afar.

"City council could live to regret this ordinance, as it imposes unusually restrictive limits on the use of the light poles," said Kent Willis, the ACLU's executive director in Virginia. "Sometime in the future when city officials want to use those light poles to promote a special event they may find themselves handcuffed by their own lawmaking."