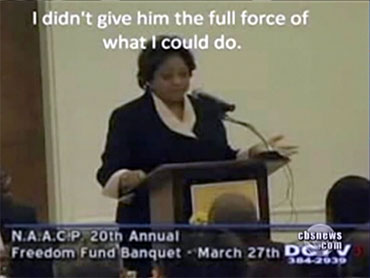 Agriculture Secretary Tom Vilsack said Wednesday he will reconsider the department's decision to oust a black employee over racially tinged remarks after learning more about what she said.

Vilsack issued a short statement early Wednesday morning after Shirley Sherrod, who until Tuesday was the Agriculture Department's director of rural development in Georgia, said she was pressured to resign because of her comments that she didn't give a white farmer as much help as she could have 24 years ago.

Sherrod said her remarks, delivered in March at a local NAACP banquet in Georgia, were part of a larger story about learning from her mistakes and racial reconciliation, not racism, and they were taken out of context by bloggers who posted only part of her speech.

The NAACP--which initially condemned her remarks, said Tuesday it was "snookered" by the initial reports based on the blog, reports CBS News chief legal correspondent Jan Crawford. The NAACP said the speech was "deliberately edited to create a false impression of racial bias."

"I am of course willing and will conduct a thorough review and consider additional facts to ensure to the American people we are providing services in a fair and equitable manner," Vilsack said.

Meanwhile, Sherrod herself said Wednesday morning she doesn't know if she'd return to her job at the Agriculture Department, even if asked.

"I am just not sure how I would be treated there," she said in a nationally broadcast interview.

The Obama administration's move to reconsider her employment was an absolute reversal from hours earlier, when a White House official, speaking on condition of anonymity, said President Obama had been briefed on Sherrod's resignation after the fact and stood by the Agriculture Department's handling of it.

But growing calls for the administration to reconsider the decision put pressure on Vilsack, who stressed that the decision to ask for her resignation was his alone. The NAACP, which initially condemned Sherrod's remarks and supported her ouster, later said she should keep her job. The civil rights group said it and millions of others were duped by the conservative website that posted partial video of her speech on Monday.

The white farming family that was the subject of the story also stood by Sherrod and said she should stay.

"We probably wouldn't have (our farm) today if it hadn't been for her leading us in the right direction," said Eloise Spooner, the wife of farmer Roger Spooner of Iron City, Ga. "I wish she could get her job back because she was good to us, I tell you."

As Sherrod reached out to media to plead her case and more people came to her defense, the administration faced criticism that officials nervous about racial perceptions overreacted to her comments and made her a political sacrifice amid dueling allegations of racism between the NAACP and the tea party movement.

In the clip posted on BigGovernment.com, Sherrod described the first time a white farmer came to her for help. It was 1986, and she worked for a nonprofit rural farm aid group. She said the farmer came in acting "superior" to her and she debated how much help to give him.

"I was struggling with the fact that so many black people had lost their farmland, and here I was faced with helping a white person save their land," Sherrod said.

Initially, she said, "I didn't give him the full force of what I could do" and only gave him enough help to keep his case progressing. Eventually, she said, his situation "opened my eyes" that whites were struggling just like blacks, and helping farmers wasn't so much about race but was "about the poor versus those who have."

The full video of Sherrod's speech showed that while she took some shots at conservatives and spoke of continued racial inequities, she focused on encouraging blacks, particularly the younger generation, to do more to help themselves.

"We have to overcome the divisions that we have," she told the audience. "Change has to start with us. ... Our young people, I'm not picking on you, but y'all gotta step up to the plate. ... You are capable of being those doctors and lawyers."

The two-minute, 38-second clip posted Monday by BigGovernment.com was presented as evidence that the NAACP was hypocritical in its recent resolution condemning what it calls racist elements of the tea party movement. The website's owner, Andrew Breitbart, said the video shows the civil rights group condoning the same kind of racism it says it wants to erase. Biggovernment.com is the same outfit that gained fame last year after airing video of workers at the community group ACORN counseling actors posing as a prostitute and her boyfriend.

In his original statement on the matter Tuesday morning, Vilsack said he had accepted Sherrod's resignation and stressed that the department had "zero tolerance for discrimination." Later in the day, after Sherrod spoke to the media about the intention of her comments, Vilsack sent out a second statement that said the controversy surrounding Sherrod's comments could, rightly or wrongly, cause people to question her decisions as a federal employee and lead to lingering doubts about civil rights at the agency, which has a troubled history of discrimination.

Sherrod said officials showed no interest in listening to her explanation when she was asked to resign. She said she was on the road Monday when USDA deputy undersecretary Cheryl Cook called her and told her to pull over and submit her resignation on her Blackberry because the White House wanted her out.

"It hurts me that they didn't even try to attempt to see what is happening here, they didn't care," Sherrod said. "I'm not a racist. ... Anyone who knows me knows that I'm for fairness."

In the full 43-minute video, Sherrod also criticized what she called the "mean-spirited" reaction to the Democratic health care bill.

"Some of the racism we thought was buried, didn't it surface?" she said. "Now we endured eight years of the Bushes, and we didn't do the stuff these Republicans are doing because you have a black president."