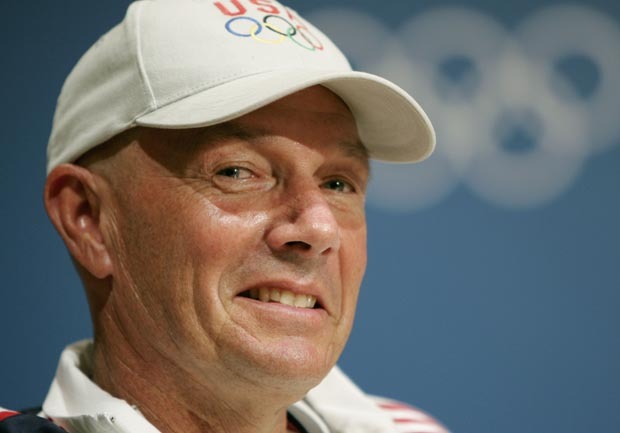 (AP) USA Swimming denied Tuesday that it had an agreement with former national coach Mark Schubert to cover up allegations of sexual misconduct by other coaches.

The organization said it felt compelled to comment even though it wasn't named in a wrongful termination lawsuit filed against Schubert a day earlier by a former colleague, Dia Rianda.

The suit alleges that Schubert hired a private investigator to take photos of another prominent coach, Sean Hutchison, engaged in improper sexual activities while working with an elite training program in Fullerton, Calif. It says Schubert was paid $625,000 by USA Swimming not to go public with the information.

Rianda, a swimming coach who, along with her husband, has given more than $100,000 to the USA Swimming Foundation, claims she was fired by Schubert in July after she went to work for him at his new team, Golden West Swim Club.

The suit, filed in Orange County Superior Court, says Rianda learned of sexual abuse charges against Schubert's close friend, Bill Jewell, and strongly objected to him working at the club. She said she was dismissed while she tried to keep children from being around Jewell while he was being investigated by USA Swimming.

USA Swimming said it "cannot comment on open investigations." Schubert did not respond to requests for comment.

Rianda's lawsuit also says Schubert knew of accusations against yet another prominent coach, Rick Curl, in the molestation of a 13-year-old girl beginning in 1983. It claims Schubert tried unsuccessfully to get USA Swimming to take action against Curl, who is reportedly set for a disciplinary hearing Wednesday and could face a lifetime ban from the organization.

Kelley Davis Currin has said Curl agreed to pay her $150,000 in return for not pursuing criminal charges after an illicit four-year relationship.

Currin and Rianda are represented by the same attorney, Robert Allard, who is involved in several lawsuits alleging USA Swimming covered up dozens of improper relationships between coaches and underage swimmers, and promoted a culture of secrecy that essentially condoned the behavior. He has called for a complete change of leadership at the organization, including the dismissal of executive director Chuck Wielgus.

USA Swimming counters that it has put in place a new safe sport program that is a model for all Olympic sports, with mandatory training for more than 31,000 non-athlete members, enhanced background checks on nearly 36,000, and lifetime bans for 16 offenders since the new program went into effect two years ago.

"I have stated all along that numerous people in the swim world knew what Rick Curl did to me," she said in a statement Tuesday issued through her attorney. "It was the worst kept secret. I read the lawsuit filed against Mark Schubert. I am angry in reading that USA Swimming failed terribly when they had an opportunity to act against Rick Curl when coach Schubert informed Chuck Wielgus on numerous occasions about Curl's molestation of me.

"The fact that Chuck Wielgus and USA Swimming allegedly tried to cover up for Rick Curl by forcing Mark Schubert to accept hush money in return for signing a confidential agreement is outrageous. If USA Swimming has any integrity they would fire Wielgus and the rest of the staff that continues to protect sexual predators."