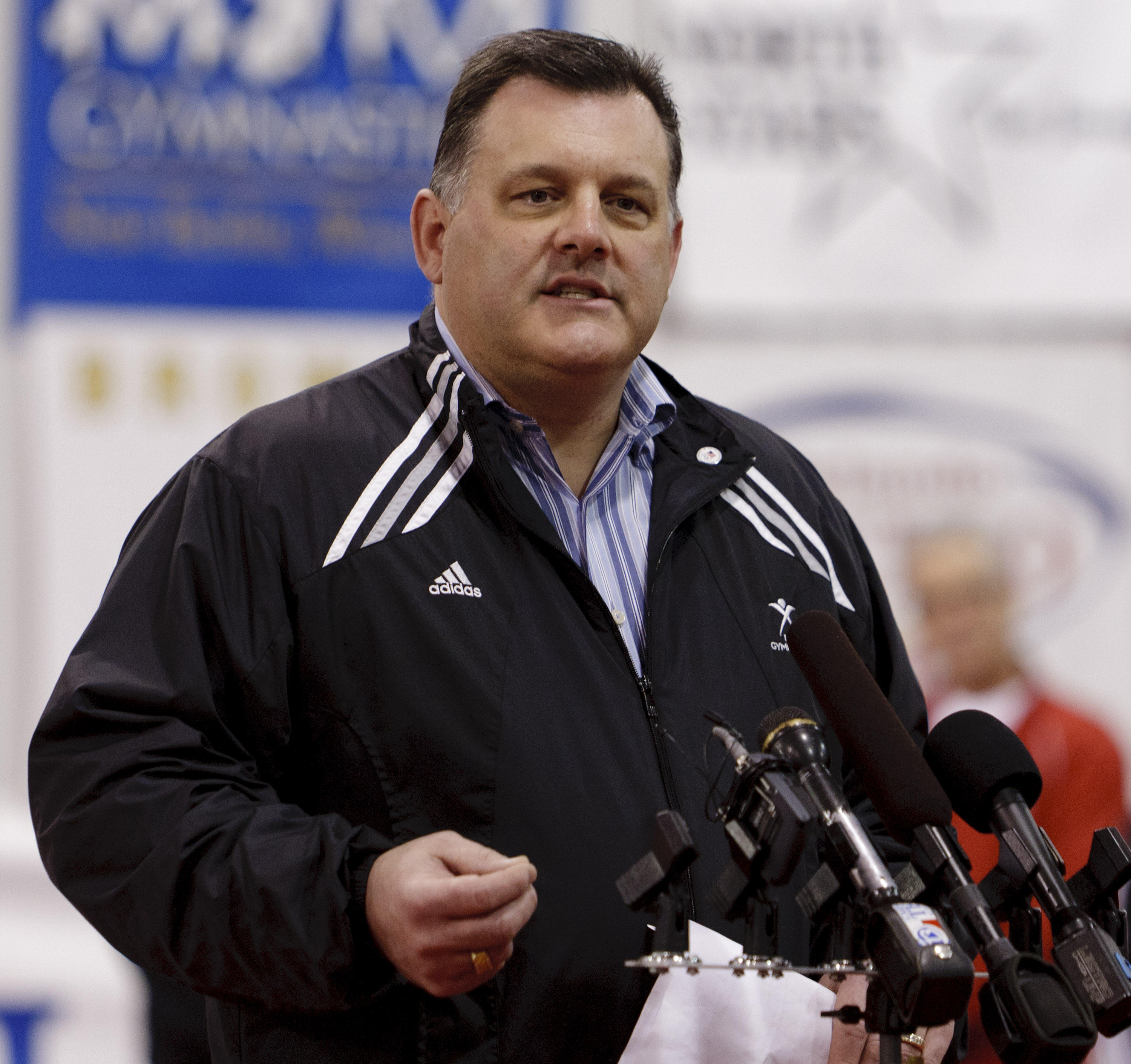 Steve Penny resigned as president of USA Gymnastics on Thursday following intensified pressure on the organization for its handling of sex abuse cases.

The resignation came a week after the United States Olympic Committee’s board recommended to USA Gymnastics chairman Paul Parilla that Penny should step down. Penny offered his resignation during a previously scheduled board meeting on Thursday.

“My decision to step aside as CEO is solely to support the best interests of USA Gymnastics at this time,” Penny said in a statement.

USOC chairman Larry Probst said Penny’s decision “will hopefully allow USA Gymnastics to shift its attention to the future with a secure environment for its athletes and continued success in competition.”

Penny joined USA Gymnastics in 1999 and was named the organization’s president in 2005, overseeing one of the greatest runs in Olympic history. Led by national team coordinator Martha Karolyi, the women’s program has become a dominant force, producing each of the last four Olympic all-around champions and team golds in 2012 and 2016. The success turned gymnasts like Simone Biles, Gabby Douglas, Nastia Liukin and Shawn Johnson into stars and made USA Gymnastics a magnet for big-time corporate sponsors who wanted to be aligned with its healthy, winning image.

That image took a serious hit in recent months following an investigation by the Indianapolis Star that portrayed USA Gymnastics as slow to act when it came to addressing allegations of sexual abuse by a team doctor and coaches at member gyms across the country.

“The Board believes this change in leadership will help USA Gymnastics face its current challenges and implement solutions to move the organization forward in promoting a safe environment for its athletes at all levels,” Parilla said in a statement.

The lawsuit claims Nassar -- who worked for the organization on a volunteer basis for nearly 30 years before being dismissed in the summer of 2015 -- sexually groped and fondled the gymnasts as teenagers.

CBS News’ “60 Minutes” spoke with three women who say the U.S. team doctor abused them, including how he earned their trust and how they believe the program enabled him.

Subsequent lawsuits have followed, including some that name Penny, Karolyi and her husband Bela as co-defendants because they “had knowledge of inappropriate conduct and molestations committed by (Nassar) before and during his employment, yet chose to allow him to remain unsupervised where he sexually abused plaintiff.”

John Manly, the attorney representing Dantzscher and scores of others who have filed suits against Penny, USA Gymnastics and others said his clients “welcome” Penny’s resignation but see his decision as simply “the end of the beginning.”

Martha Karolyi retired last August and sold the training gyms at the Karolyi Ranch north of Houston to USA Gymnastics.

Nassar was fired by USA Gymnastics after Penny heard of an athlete’s concerns about Nassar’s conduct and went to federal authorities. The organization initially claimed it notified the authorities immediately but amended its timeline last month, indicating it conducted its own investigation during a five-week span before reporting Nassar to the FBI. Nassar is in prison in Michigan, where he worked for decades at Michigan State University before being fired last fall. He faces charges in both the state and federal system.

USA Gymnastics hired a former federal prosecutor last fall to conduct an extensive review of the organization’s policies in regards to potential sexual misconduct. The report by Deborah J. Daniels is expected sometime in the spring or early summer.

The gregarious Penny -- whose booming voice and penchant for wearing eye-catching shoes during big events made him stand out in a sea of gymnasts -- has denied any wrongdoing and the USA Gymnastics board of directors had remained supportive throughout the firestorm.

That didn’t stop the USOC from sending recommendations to USA Gymnastics last week. While the USOC does not have official authority to remove heads of national governing bodies, it can apply pressure by threatening to withhold funding. The USOC gives USA Gymnastics a cash grant of nearly $2 million annually.

Pressure also has been building within the gymnastics community. International Gymnastics Camp, a summer camp located in Stroudsburg, Pennsylvania, announced last week it was pulling its sponsorship of the organization. “USA Gymnastics must become the leading governing body in child safety considerations including National Team programs and club programs alike,” camp director Brent Klaus wrote in an open letter on the camp’s web site.

Penny’s departure is not enough for some of the women who have filed suit against Nassar and the organization. Attorney John Manly, who is representing more than 70 women currently suing Nassar and USA Gymnastics, issued a letter to USOC chairman Larry Probst this weekend asking the USOC to de-certify USA Gymnastics.

The letter pointed to the Ted Stevens Amateur Sports Act, a federal law that guarantees athletes the right to compete without discrimination. The letter pointed to misconduct by coaches as proof that USA Gymnastics “maternally inhibits these women’s ability to participate in their sport.”