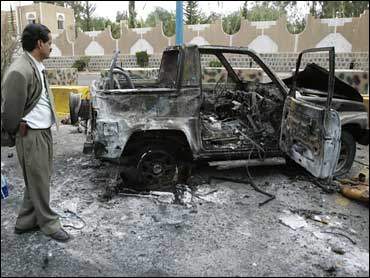 The State Department has confirmed that a young American woman and her Yemeni husband were killed in a terrorist attack at the U.S. Embassy in Yemen.

Susan Elbaneh, 18, a U.S. citizen from Lackawanna, N.Y., who was recently wed in Yemen in an arranged marriage, was killed along with her Yemeni husband as they stood outside the embassy, family members said Wednesday. They were apparently there to do paperwork for the husband's move to the U.S. when the attackers struck, said Elbaneh's brother, Ahmed.

Relatives acknowledged that Susan Elbaneh is related to Jaber Elbaneh, who is in custody in Yemen and faces U.S. charges of providing material support to a foreign terrorist organization. They stressed that had nothing to do with Susan, saying she was an innocent victim of Wednesday's attack.

Elbaneh, a high school senior, was among eight children in the family, which her brother described as "huge and close-knit." Ahmed Elbaneh said she planned to return to New York with her new husband, finish school and become a nurse.

She had been in Yemen for a month for the marriage on Aug. 25.

The attack killed 16 people, including six militants, and was the deadliest direct assault on a U.S. Embassy in a decade. The attackers failed to breach the compound's walls, and none of those killed or wounded were U.S. diplomats or embassy employees.

At least 25 militants with suspected links to al Qaeda have been arrested in connection with the deadly attack on the U.S. Embassy in the Yemeni capital, a senior security official said Thursday.

The Yemeni official said the 25 have been rounded up from various parts of Yemen over the past 24 hours and were being questioned by Yemeni and U.S. investigators.

It is not unusual for authorities in Yemen, a key partner in the U.S.-led war on terror but for years an al Qaeda stronghold, to round up a large number of suspects in the wake of a terror attack.

The official, speaking on condition of anonymity because he is not authorized to speak to the media, said a U.S. team, possibly from the Federal Bureau of Investigation, was on its way to Yemen to take charge of the investigation. U.S. Embassy spokesman Ryan Gliha would only say that it is "standard procedure" to dispatch an FBI team in cases of attacks against U.S. interests abroad.

The attack Wednesday killed 16 people but failed to breach the compound's walls. None of those killed or wounded were U.S. diplomats or embassy employees.

Also Thursday, an Associated Press reporter who visited the embassy saw a group of non-Yemeni men investigating the damage caused by the attack outside the embassy's large walls.

The men were sifting through the debris, plastering what appeared to be white tag cards on several objects scattered on the ground.

The reporter could also see pieces of what appeared to be human flesh outside the walls, which were pock marked and stained with blood. There was also a small crater just outside the walls.

Wednesday's attack was the deadliest direct assault on a U.S. Embassy in a decade.

The attackers fired automatic weapons and set off grenades and a car bomb.

The heavily guarded embassy is located in the affluent Dhahr Himyar district, a residential area dotted with five-star hotels and other embassies. Palls of black smoke rose over the street, lined with modern buildings in the style of the centuries-old white-trimmed mud brick houses that are a landmark of San'a's Old City.

Snipers hidden across the street fired on emergency personnel rushing to the scene.

The attackers, some dressed in army uniforms, were stopped short of the compound's walls by guards and massive security barriers, but civilians waiting in line for visas outside the embassy were among the casualties. Three police officers and seven civilians were injured, including children in a residential compound across the street from the embassy, home to many Westerners.

President Bush called the attack "a reminder that we are at war with extremists who will murder innocent people to achieve their ideological objectives."

The U.S. counts Yemen as an ally in the war on terrorism. But American officials have long been frustrated over what is seen as a "revolving door" policy toward al Qaeda militants by President Ali Abdullah Saleh's government.

Yemen has let some convicted militants go free after promising to refrain from violence.

In 2006, a group of 23 militants escaped from a high-security prison, including 10 figures convicted in al Qaeda's 2000 bombing of the USS Cole destroyer in Aden harbor. There were widespread reports of security officials' collusion in the escape, and experts say Yemen's security and intelligence services are riddled with militant sympathizers.

State control is weak in the impoverished country - the ancestral homeland of Osama bin Laden - tribes are strong and many mountainous rural areas are lawless, giving ample room for militant training camps.

The U.S. Embassy has been attacked four times since 2003, most recently in March when a volley of mortars targeting the compound hit a neighboring girls high school instead, killing a Yemeni guard and wounding dozens of girls.

Just last month, the State Department allowed the return of nonessential embassy personnel and family members who had been ordered to leave after the mortars.

There has not been a public claim of responsibility for the attack. Some Yemeni security officials said a local militant group called Islamic Jihad, which Yemeni authorities have cracked down on previously, claimed responsibility.

But CBS News has found at least one example of an earlier attack claim by the group that was shown to be fraudulent by a confirmed claim from al Qaeda just hours later.

The group is unrelated to the Palestinian group of the same name.

Suspicion about Wednesday's attack was immediately centered on al Qaeda, which has long operated in the country on the southern tip of the Arabian peninsula.

Yemen has been a focus of American counterterrorism efforts ever since the 2000 Cole attack, in which 17 American sailors were killed by suicide bombers on a boat. A similar attack two years later hit a French oil tanker, killing one person. Since that attack and the Sept. 11 attacks, Yemen has been cracking down on militants, earning praise from Washington.

But American officials have increasingly grumbled over what they see as Yemen's failures to keep suspects in custody and its willingness to compromise with militants.

Seventeen suspects in the Cole bombing were arrested, but 10 escaped in the 2006 prison break although some have since been recaptured or killed or surrendered.