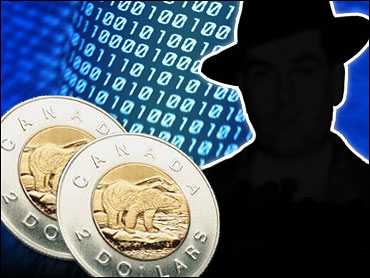 Money talks, but can it also follow your movements?

In a U.S. government warning high on the creepiness scale, the Defense Department cautioned its American contractors over what it described as a new espionage threat: Canadian coins with tiny radio frequency transmitters hidden inside.

The government said the mysterious coins were found planted on U.S. contractors with classified security clearances on at least three separate occasions between October 2005 and January 2006 as the contractors traveled through Canada.

Intelligence and technology experts said such transmitters, if they exist, could be used to surreptitiously track the movements of people carrying the spy coins.

The U.S. report does not suggest who might be tracking American defense contractors or why. It also does not describe how the Pentagon discovered the ruse, how the transmitters might function or even which Canadian currency contained them.

Further details were secret, according to the U.S. Defense Security Service, which issued the warning to the Pentagon's classified contractors. The government insists the incidents happened, and the risk was genuine.

"What's in the report is true," said Martha Deutscher, a spokeswoman for the security service. "This is indeed a sanitized version, which leaves a lot of questions."

Top suspects, according to outside experts: China, Russia or even France — all said to actively run espionage operations inside Canada with enough sophistication to produce such technology.

The Canadian Security Intelligence Service said it knew nothing about the coins.

"This issue has just come to our attention," CSIS spokeswoman Barbara Campion said. "At this point, we don't know of any basis for these claims." She said Canada's intelligence service works closely with its U.S. counterparts and will seek more information if necessary.

Experts were astonished about the disclosure and the novel tracking technique, but they rejected suggestions Canada's government might be spying on American contractors. The intelligence services of the two countries are extraordinarily close and routinely share sensitive secrets.

"It would seem unthinkable," said David Harris, former chief of strategic planning for the Canadian Security Intelligence Service. "I wouldn't expect to see any offensive operation against the Americans."

Harris said likely candidates include foreign spies who targeted Americans abroad or businesses engaged in corporate espionage. "There are certainly a lot of mysterious aspects to this," Harris said.

Experts said such tiny transmitters would almost certainly have limited range to communicate with sensors no more than a few feet away, such as ones hidden inside a doorway. The metal in the coins also could interfere with any signals emitted.

"I'm not aware of any (transmitter) that would fit inside a coin and broadcast for kilometers," said Katherine Albrecht of Consumers Against Supermarket Privacy Invasion and Numbering (CASPIAN), an expert on radio frequency identification (RFID) transmitters, who believes such technology carries serious privacy risks. "Whoever did this obviously has access to some pretty advanced technology."

Experts said hiding tracking technology inside coins is fraught with risks because the spy's target might inadvertently give away the coin or spend it buying coffee or a newspaper. They agreed, however, that a coin with a hidden tracking device might not arouse suspicion if it were discovered in a pocket or briefcase.

"It wouldn't seem to be the best place to put something like that; you'd want to put it in something that wouldn't be left behind or spent," said Jeff Richelson, a researcher and author of books about the CIA and its gadgets. "It doesn't seem to make a whole lot of sense."

Canada's largest coins include its $2 "Toonie," which is more than 1-inch across and thick enough to hide a tiny transmitter. The CIA has acknowledged its own spies have used hollow, U.S. silver-dollar coins to hide messages and film.

The government's 29-page report was filled with other espionage warnings. It described unrelated hacker attacks, eavesdropping with miniature pen recorders and the case of a female foreign spy who seduced her American boyfriend to steal his computer passwords.

In another case, a film processing company called the FBI after it developed pictures for a contractor that contained classified images of U.S. satellites and their blueprints. The photo was taken from an adjoining office window.