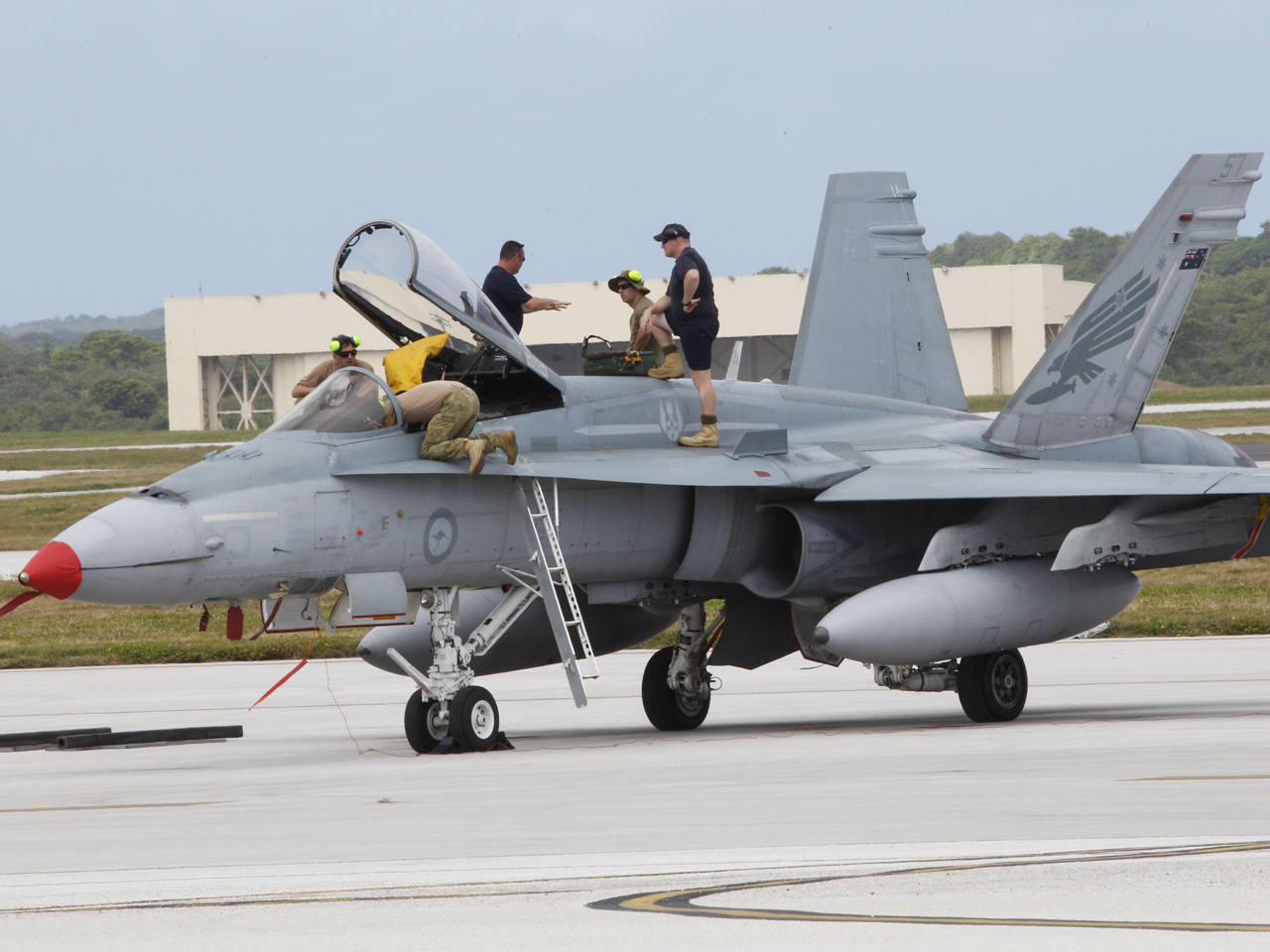 ANDERSEN AIR FORCE BASE, Guam Fighter jets from the U.S. and two key allies roared into western Pacific skies Thursday in the combat phase of annual exercises that have gained importance as the region responds to the rise of China and other potential threats.

The Cope North drills — which could soon swell in participants — are aimed at preparing air forces of the U.S., Japan and Australia to fight together if a military crisis erupts. They also send a vivid reminder to Beijing that America's regional alliances are strong, though officers leading the maneuvers say they are not looking to bait the Chinese military.

"The training is not against a specific country, like China," Japan Air Self-Defense Force Lt. Gen. Masayuki Hironaka said. "However, I think (the fact) that our alliance with the U.S. and Australia is healthy is a strong message."

The three allies began flying sorties together earlier in the week around the U.S. territory of Guam in a humanitarian phase of the exercises, dropping emergency assistance in packages that wafted down under parachutes to jungle airfields. On Thursday, fighter jets were joined by bombers, transport planes and tankers that refuel the fighters in midair. For the first time, Japanese tankers were joining the drills.

Maneuvers like Cope North are a key element of Washington's evolving strategy in the Pacific as the U.S. shifts its emphasis away from Afghanistan and fighting ground wars. It is now placing more attention on Asia and the possibility of an air or sea confrontation with the rapidly modernizing Chinese military, which has been briskly improving its forces and using its growing muscle to back up territorial claims that have raised regional tensions.

This "Pacific rebalance" will bring newer and more advanced aircraft and ships to the Pacific theater over the next several years and spread out the tens of thousands of U.S. troops now primarily based in Japan and South Korea. U.S. Marines have already begun rotational deployments to Darwin, in northern Australia, and about 9,000 Marines stationed on the southern Japan island of Okinawa are to be moved to this tiny island, Hawaii and other locations.

The changes reflect a deepening strategic concern over the rise of China as a regional military power with the potential to challenge Washington's ability to intervene in a crisis, particularly around Taiwan or islands in the south and east China seas that are contested by China and U.S. allies such as the Philippines and Japan.

But the emphasis on alliance-building through exercises like Cope North also underscores fears in the Pentagon that major budget cuts looming in Congress could make it difficult for Washington to shoulder the whole burden of keeping China in check.

Pacific Air Forces commander Gen. Herbert Carlisle said he believes the budget cuts now being considered could threaten America's role as a superpower. He noted that China's military, and especially its navy, have been undergoing a "massive buildup" and are becoming a more credible challenge to their U.S. counterparts.

So, strategic alliances are now more important than ever.

Washington's renewed focus on Asia has generally been welcomed by its more-established and prosperous allies — like Japan and Australia — because they share the U.S. concerns that changes in the balance of power could hurt economic growth throughout the region.

"I think nations throughout the region are looking for that increased support that working with the U.S. is likely to bring," said Royal Australian Air Force Air Commodore Anthony Grady. "Australia welcomes the refocus."

Japan also has a more urgent need to tout its U.S. alliance.

Its coast guard ships and fighter aircraft have been deployed frequently over the past several months to drive their Chinese counterparts away from a group of small uninhabited islands that both nations claim as their own. The dispute has soured diplomatic and trade relations and shows no sign of abating.

Under a treaty, the U.S. is obliged to come to Japan's assistance if the islands are attacked or occupied. Hironaka noted that during Cope North, which involves about 1,700 troops, Japanese fighter jets will conduct needed bombing training that they cannot do in their own country because of crowding and safety restrictions.

"Training with the U.S. is very important to us," he said. "The U.S.-Japan alliance is key to security in the region."

Not all Asian nations have been so receptive to the U.S. Pacific policy.

Some countries have expressed doubts about how far the United States would be willing to go to support them in a crisis, especially since China is one of Washington's most important trading partners. Others have voiced concerns that exercises like Cope North send a confrontational message that might lead to higher tensions.

Carlisle acknowledged that is a possibility.

"I think the PRC has a tendency to look at things in a different light," he said. "I think they may take this as something different than it is intended."