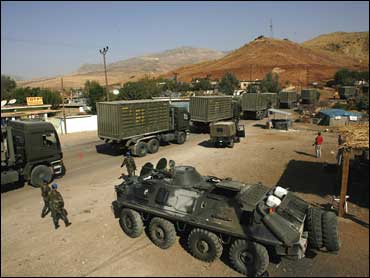 The United States has opened a "diplomatic full court press" to urge Turkey not to invade northern Iraq, the State Department said Monday, as tensions between the two countries soared following an ambush by rebel Kurds that killed 12 Turkish soldiers and left eight missing.

The increased dialogue led to one announcement by Iraq's president, a Kurd, who said Monday that Kurdish rebels will announce a cease-fire, as Turkey threatened to attack Kurdish guerrilla bases in northern Iraq.

Turkey is moving fire power and troops closer to Iraq as a border war threatens to become an invasion the United States desperately does not want to happen, reports CBS News national security correspondent David Martin.

"We do not believe unilateral cross-border operations are the best way to address this issue," he said, describing Rice's call to Erdogan, whose government has threatened military incursions into Iraq to deal with the PKK. "It's important that there be action to counter the PKK."

"In our view, there are better ways to deal with this issue," he said, stressing that United States regards the PKK as a terrorist organization. "We think the best way to do this - and that is to address the PKK threat - is for the Turks and the Iraqis to work together to mitigate it and eliminate it," McCormack added.

"We are going to do everything we can to encourage Turkey and Iraq to work together to address what is a common threat," he told reporters, adding that Washington wants authorities in Iraq to step up their efforts against the PKK.

"She (Rice) underlined to President Barzani the importance of Iraq working actively with the Turkish government to counter what is a real threat to Turkish citizens," he said. "It's important that there be action to counter the PKK."

Erdogan said earlier that he had told Rice that Turkey expected "speedy steps from the U.S." in cracking down on Kurdish rebels and that Rice had asked "for a few days" from him.

McCormack did not dispute the account of the conversation but declined to comment on what Rice had meant by asking for "a few days."

As Rice was speaking to Erdogan and Barzani, McCormack said, the U.S. Ambassador to Iraq, Ryan Crocker, was making similar points in Baghdad with Iraqi President Jalal Talabani - himself a Kurd - who ordered the PKK to lay down their arms or leave Iraq, and Iraqi Prime Minister Nouri al-Maliki.

The spokesman added that he "would not be surprised" if White House officials, including possibly President Bush, followed up the Rice and Crocker conversations with Turkish and Iraqi officials.

"From our perspective this is a diplomatic full-court press," McCormack said. "We want to see an outcome where you have the Turks and the Iraqis working together and we will do what we can to resolve the issue without a Turkish cross-border incursion."

President Talabani said, and his office confirmed, that the PPK will issue a cease-fire later Monday. More details were not immediately available.

Turkish Foreign Minister Ali Babacan said his country will pursue diplomacy before it sends troops across the rugged frontier.

"We will continue these diplomatic efforts with all good intentions to solve this problem caused by a terrorist organization," Babacan told reporters in Kuwait where he was visiting as part of a tour of Arab states to explain Ankara's plans. "But in the end, if we do not reach any results, there are other means we might have to use."

U.S. intelligence believes Turkey will stop short of a full-scale invasion, adds Martin. So for now, says one military officer, the plan is to "stay the hell away from there and hope to God it doesn't get out of control."