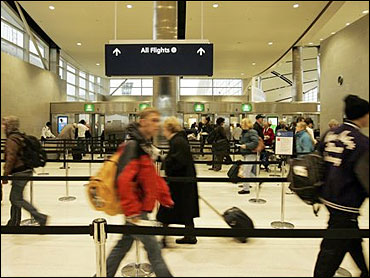 Homeland Security Secretary Michael Chertoff urged EU lawmakers Monday to drop their objections to a new deal with Washington on the transfer of passenger information from trans-Atlantic flights, insisting an agreement was indispensable to fighting terrorism.

Chertoff is pushing for a deal with the European Union that would give American law enforcement agencies continued access to data gathered about European passengers on U.S.-bound flights.

The current interim deal expires in July, and the European Parliament is demanding guarantees that a new agreement would better respect the EU's stringent data protection standards as well as the privacy of its citizens.

Speaking Monday to the EU assembly's civil liberties committee, Chertoff said that had such a system been in place before the Sept. 11 terror attacks on the U.S., 11 of the 19 plane hijackers would have been identified.

"With three simple analytic moves, using this kind of data, we would have ... stopped them from coming into the U.S. It is difficult, in the face of that clear, tragic lesson of history to abandon a tool which at minimal cost to civic liberty has a tremendous potential to save lives," Chertoff said.

The current deal allows the U.S. Customs and Border Protection agency to disclose passenger data to other U.S. law enforcement agencies for use in anti-terror investigations if those agencies have data protection standards comparable to those of the EU.

Chertoff said it was imperative that information gathered from passengers is shared among all relevant U.S. government services if necessary.

"Inadequate information sharing ... was a critical deficiency that led to 9/11," he said.

However, some EU lawmakers argued privacy was not protected enough.

"Are you willing to conclude an agreement ... that reflects the American as well as the EU legal principles and interests, instead of imposing unilaterally U.S. standards and wishes?" Dutch lawmaker Sofia in 't Veld asked Chertoff.

The EU and the United States have to agree to a new deal before July to avoid problems for both airlines and people from the EU.

A maximum of 34 pieces of data — such as passenger names, addresses, seat numbers, and credit card and travel details — are transferred to U.S. authorities within 15 minutes of a flight's departure for the United States.

An agreement is needed because the transfer of so-called Passenger Name Records to the U.S. without certain privacy safeguards has violated EU data protection rules in the past.

Washington had warned that airlines failing to share passenger data under its anti-terror screening rules faced fines of up to $6,000 per passenger and the loss of landing rights.

Negotiations focus on how much and how long U.S. authorities can use data, when it should be destroyed, and which authorities should have access.