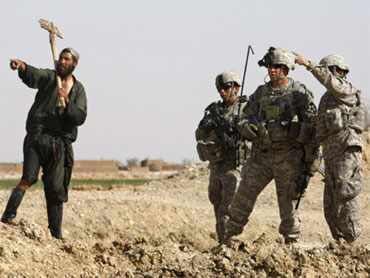 U.S. and Afghan soldiers linked up with Marines on the outskirts of the Taliban stronghold of Marjah on Thursday, sealing off escape routes and setting the stage for what is being described as the biggest offensive of the nine-year war.

Taliban defenders repeatedly fired rockets and mortars at units poised in foxholes along the edge of the town, apparently trying to lure NATO forces into skirmishes before the big attack.

CBS News correspondent Mandy Clark, embedded with U.S. Marines on the frontline, reports that she and the troops were forced to hit the deck suddenly Thursday when they heard incoming mortar fire.

Clark reports that the frontline is actually creeping forward slowly, but that a heavy presence of American troops was just a few miles from the center of Marjah on Thursday afternoon.

Up to 1,000 militants are believed holed up in Marjah, a key Taliban logistics base and center of the lucrative opium poppy trade. But the biggest threats are likely to be the land mines and bombs hidden in the roads and fields of the farming community, 380 miles (610 kilometers) southwest of Kabul.

The precise date for the attack has been kept secret. U.S. officials have signaled for weeks they planned to seize Marjah, a town of about 80,000 people in Helmand province and the biggest community in southern Afghanistan under Taliban control.

NATO officials say the goal is to seize the town quickly and re-establish Afghan government authority, bringing public services in hopes of winning support of the townspeople once the Taliban are gone. Hundreds of Afghan soldiers were to join U.S. Marines in the attack to emphasize the Afghan role in the operation.

A Taliban spokesman dismissed the significance of Marjah, saying the NATO operation was "more propaganda than military necessity."

Nevertheless, the spokesman, Mohammed Yusuf, said in a dialogue on the Taliban Web site that the insurgents would strike the attackers with explosives and hit-and-run tactics, according to a summary by the SITE Intelligence Group, which monitors militant Internet traffic.

In preparation for the offensive, a U.S.-Afghan force led by the U.S. Army's 5th Stryker Brigade moved south from Lashkar Gah and linked up Thursday with Marines on the northern edge of Marjah, closing off a main Taliban escape route. Marines and Army soldiers fired colored smoke grenades to show each other that they were friendly forces.

The Army's advance was slowed as U.S. and Afghan soldiers cleared the thicket of mines and bombs hidden in canals and along the roads and fought off harassment attacks along the way by small bands of insurgents. Two U.S. attack helicopters fired Hellfire missiles at a compound near Marjah from where insurgents had been firing at the advancing Americans.

(CBS)
Marines along the edge of the town exchanged fire with insurgents. There were no reports of casualties.

"I am not surprised at all that this is taking place," said the battalion commander, Lt. Col. Brian Christmas. "We are touching their trigger-line," referring to the outer rim of the Taliban defenses.

A far greater obstacle lies in the hundreds, if not thousands, of mines, makeshift bombs and booby traps which the Taliban are believed to have planted around Marjah.

"This may be the largest IED threat and largest minefield that NATO has ever faced," said Brig. Gen. Larry Nicholson, commander of Marines in southern Afghanistan.

A British soldier was killed in a bombing Thursday in Helmand province, the Ministry of Defense announced in London. It was unclear whether the soldier was part of the Marjah operation.

In eastern Afghanistan, the spokesman for Paktia province, Roullah Samoun, said five Americans were wounded when a suicide attacker wearing a border police uniform blew himself up at a U.S. base near the Pakistan border. A U.S. statement said "several" U.S. service members were injured in an explosion at a joint U.S.-Afghan outpost in Paktia, but gave no further details.

To combat the mines, Marines planned to use their new 72-ton Assault Breacher Vehicles, which use metal blows to scoop up hidden bombs or fire rockets to detonate them at a safe distance.

Once the main attack begins, U.S. commanders are eager to avoid civilian casualties, hoping instead to win over support of the Pashtun townspeople, who are from the same ethnic group as the majority of the Taliban. American officers have been instructing troops to hold their fire unless they are sure they are shooting at insurgents and not innocent villagers.

On Thursday, Afghanistan's interior minister, Hanif Atmar, met with a group of tribal elders explaining the goals of the operation and asking for their support.

"This operation is designed to open the way for those Afghans who want to join the peace process and to use the military power against those foreign terrorists who are hiding here," Atmar told the elders during a meeting in Lashkar Gah, the Helmand provincial capital about 20 miles northeast of Marjah.

The elders told Atmar that their support depended on how the operation was carried out and whether a large number of civilians were killed or injured in the fighting.

One elder, Mohebullah Torpatkai, said that if the operation improved the lives of civilians, "we the people of Marjah will fully support it."

As the Marines waited for battle, they received their first mail delivery since arriving in the Marjah area.

Some Marines burned their letters after reading them, either because they didn't want to carry any extra weight or have the letters fall into the wrong hands if they lost them in the fighting.

Others held on to them.

"I'm not burning any of my pictures or letters," said Cpl. Christian Martir, 23, from Northridge, Calif., as he stared at photos from his girlfriend. "She also sent a little letter. I'm keeping all of it," he said.