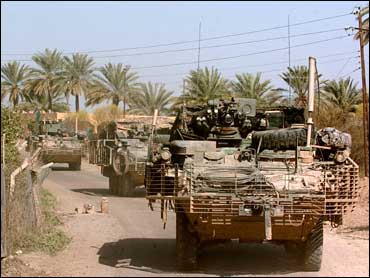 Some 700 American soldiers rolled into Baqouba on Tuesday, shifting out of Baghdad to help carry the security campaign against sectarian violence to a nearby volatile province where Sunni Arab insurgents fled ahead of the crackdown in the capital.

The fresh troops from the Army's 5th Battalion, 20th Infantry Regiment — equipped with Stryker armored vehicles — joined 3,500 U.S. and 20,000 Iraqi soldiers already in Diyala, where insurgents have stepped up attacks as violence appears to be ebbing in Baghdad.

U.S. commanders said they had been planning to fan out from Baghdad into communities around the capital, such as Baqouba 35 miles to the northeast, to go after insurgents and clandestine workshops that rig car bombs used in attacks in the capital.

"This is not a haphazard fire drill to save the house from burning," Maj. Gen. Benjamin Mixon, commander of U.S. forces in northern Iraq, told The Associated Press. "We began looking at this several months ago in support of the Baghdad plan. We knew the surrounding provinces would be in play."

The 5th Battalion's move occurred as more than 20,000 U.S. troops are pouring into Baghdad seeking to end the bombings, kidnappings and execution-style killings that paralyzed the Iraqi government and threatened the nation with all-out sectarian war.

With sectarian bloodshed ebbing in Baghdad, attacks on U.S. troops in Diyala have risen 70 percent since summer, according to U.S. figures.

Over the weekend, gunmen believed to be Sunni extremists raided a farming community outside the Diyala city of Muqdadiyah, setting fire to at least 15 houses, slaughtering livestock and driving off the residents, the U.S. military said Tuesday. It quoted residents as saying they tried to defend their homes but fled after they ran out of ammunition.

U.S. officials attribute the rise to Sunni insurgents who fled the capital to areas where they have support from al Qaeda and loyalists of Saddam Hussein's ousted regime.

The former al Qaeda in Iraq leader, Abu Musab al-Zarqawi, was killed in a U.S. airstrike in Baqouba last June. Since then, the Islamic State of Iraq, another group with links to al Qaeda, has claimed Baqouba as capital of its self-proclaimed shadow government.

For the soldiers of the 5th Battalion, the journey to Baqouba was another stage in a series of missions away from their home at Fort Lewis, Wash.

"We embark on another journey, boys!" Sgt. William Rose told his platoon as their Stryker combat vehicle rumbled out of Baghdad at sunrise, one of about 100 vehicles making the journey.

The rumble of outgoing artillery fire shook the ground underneath them. Before long, dusty tracts of wasteland gave way to palm groves and canals.

Soldiers used to operating in Baghdad wondered what lay ahead.

Rose, 26, of Arlington, Mass., said he hoped serving out the remainder of his Iraq tour in Diyala would be easier on his wife and two young daughters back home because so much news from Iraq comes out of Baghdad.

"Being in Baghdad, every little bombing or fight is reported, and they hear about it and worry," he said. "But it's hard to breathe a sigh of relief to be out of Baghdad, because we just don't know what's to come."

He then pulled aside a reporter to add: "I don't want to go by hearsay, but the word is that (Baqouba) is the worse place ever."

"But wherever the insurgents go and try to flee, we'll follow and try to flush them out," he said. "The Baghdad security plan encompasses the provinces around it, too."

The battalion will be based in Baqouba and focus on counterinsurgency measures and training Iraqi forces, said Col. David W. Sutherland, the U.S. commander in Diyala.

"We'll have more soldiers to interact with the population," he said. "It's about making the Iraqi people feel secure, and we can do that with additional forces they have confidence in."

At least 23 people were killed or found dead Tuesday in Baghdad, including four men shot to death in a Sunni mosque in the southwest of the city, the Interior Ministry reported. Of those, 14 were found handcuffed and shot to death in apparent sectarian reprisal killings.

Eight other bodies were found in Kut, including a translator who worked for coalition forces, and five corpses turned up in the northern city of Mosul, police said.

Also in Mosul, five mortar rounds exploded in the city center, killing one civilian and wounding four, police said. Militants also blasted the home of a traffic policeman, killing a bystander on the sidewalk, police said.