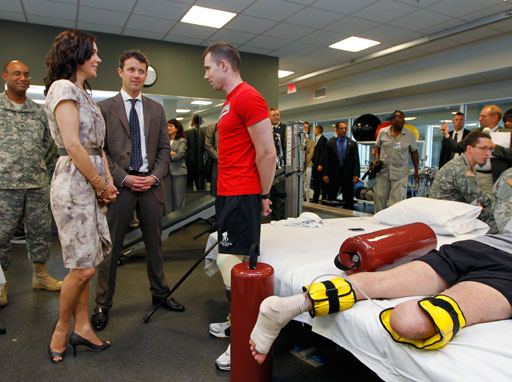 The year 2010 is shaping up to be the worst year, by far, for the number of wounded American troops in Afghanistan.

According to statistics compiled by the Defense Manpower Data Center, 2,000 American soldiers were wounded in action in Afghanistan from January 1 to July 3 this year. That's almost as many as the 2,139 troops injured in all of 2009.

That's also more than four times as many as the 485 wounded in the first six months of 2009.

The Defense Manpower Data Center serves under the Office of the Secretary of Defense to gather personnel, manpower, financial, and other data for the Department of Defense.

And 2010 will also likely become the deadliest for Operation Enduring Freedom - 174 service members have been killed in action so far this year, compared to 272 all of last year.

June was the deadliest month (60) since the overthrow of the Taliban, and it also saw the highest number of wounded (517).

The number of American soldiers killed in Afghanistan since invasion began on October 7, 2001, has now reached 1,142, the number of wounded 6,773.

With the troop surge and counterinsurgency strategy of Gen. David Patraeus (and Gen. Stanley McChrystal before him) in full swing, a corresponding surge in deaths and wounding was expected. But Petraeus is assuming control at a critical time, and there are concerns over whether Afghanistan is a salvageable war. Casualty numbers are providing an increasingly gloomy picture of Operation Enduring Freedom.