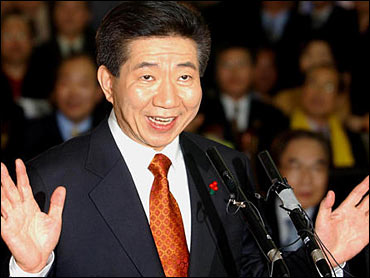 Ahead of a summit with President Bush, South Korea's leader said the two allies were united in seeking a peaceful solution to the North Korean nuclear standoff.

But President Roh Moo-hyun cautioned that a solution will take time, and that many difficulties lie ahead. And he said many in his country fear the U.S. could start a war on the Korean peninsula.

At Wednesday evening's summit, Roh planned to reaffirm the U.S.-South Korean alliance, which has come under strain in recent months, and reiterate his belief that negotiations are the only way to resolve concerns over North Korea's suspected development of nuclear weapons.

"Korea and the United States share a common understanding of how to resolve the problem," Roh said.

Although South Korea and the United States agree that North Korea must not be allowed to have nuclear weapons, their approaches differ.

South Korea wants the United States to be more enthusiastic about talking to North Korea and fears Washington might eventually push for economic sanctions against the isolated North or even resort to military action.

Washington, however, says its demand that the North give up its nuclear programs is not subject to negotiation.

Roh is steadfastly opposed to a U.S. pre-emptive strike as a way of dealing with the country's troublesome neighbor.

Mr. Bush has said all along he favors a diplomatic solution, while emphasizing that no option is being ruled out. But Roh is not sure how long Bush is prepared to stick with his policy of patient diplomacy.

"There are some Koreans who believe that President Bush's peaceful resolution principles may change at any minute," he says.

Some in the administration doubt that mere dialogue will induce the North Koreans to dismantle their nuclear weapons and their missile programs. In some quarters, Roh is regarded as a toothless appeaser.

Without credible pressure, Roh's critics in the administration believe that North Korea will simply proliferate on a greater scale than before, marketing nuclear weapons to the highest bidder — much as they have with missiles.

White House officials expect no breakthrough from the summit, but view it as a step in bringing other countries in the region into the issue. Mr. Bush meets with Japanese Prime Minister Junichiro Koizumi at his Texas ranch next week, another key step in this process, the official said.

The U.S. has insisted on a multilateral approach to the Korean situation, despite Pyongyang's demands for bilateral talks.

Mr. Bush's main objective in his meeting with Roh was to make face-to-face contact and project a unified front to avoid any rift that Pyongyang might try to exploit, U.S. officials said.

Some White House officials have been pleasantly surprised by Roh's willingness to cooperate. He ran for office promising a more equal partnership with Washington but has proved a cooperative partner as the North Korean nuclear standoff has grown more tense.

At talks in Beijing last month, North Korea said it would give up its nuclear and missile programs in exchange for economic aid and security guarantees.

The Beijing talks were the first since the crisis flared in October, when Washington said North Korea admitted running a secret nuclear weapons program in violation of a 1994 treaty with Washington.

North Korea subsequently withdrew from the Nuclear Nonproliferation Treaty and took steps to restart nuclear facilities frozen under the pact.

North Korea said Monday that a 1992 agreement with South Korea not to deploy nuclear arms on the Korean Peninsula was nullified and accused the United States of derailing the deal.