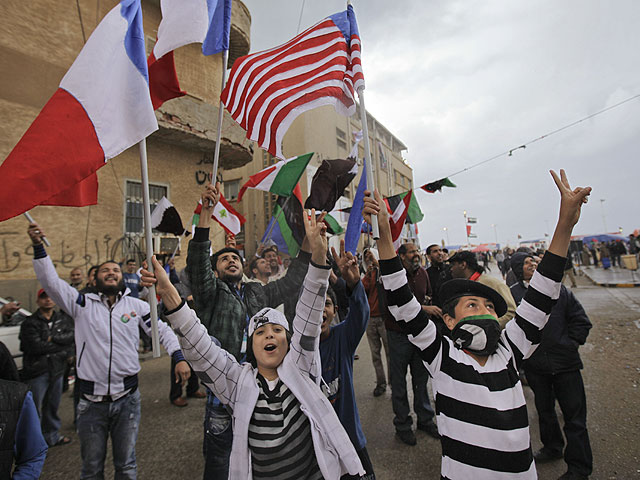 Defense Secretary Robert Gates and Navy Adm. Mike Mullen, chairman of the Joint Chiefs of Staff, on Thursday announced in congressional testimony the decision to withdraw U.S. combat aircraft from the NATO-commanded mission as of this coming Sunday.

They made no mention of putting the Tomahawk-firing ships and subs on standby as well. But the U.S. officials, speaking on condition of anonymity to discuss sensitive military planning, said the Pentagon will not fire the powerful long-range missiles unless the situation changes.

After the U.S. standdown takes effect on Sunday, Navy ships and submarines armed with Tomahawks will remain in the Mediterranean in position to resume firing if requested by NATO and approved by the Pentagon, the officials said. U.S. attack aircraft at land bases in Italy and aboard a Navy amphibious ship will also be at the ready, the officials said.

They will be still supplying crucial services, including aerial reconnaissance from the AWACS and also the refueling operations, reports CBS News correspondent Elizabeth Palmer. NATO aircraft will perform the combat role as well as patrol a no-fly zone.

As of Friday morning, a total of 221 U.S. Tomahawks had been launched since the military campaign began March 19, according to Pentagon figures. In addition, British naval vessels had launched seven Tomahawks. The cruise missiles use satellite navigation devices to find their targets, which have included air defense sites along the Libyan coast and at inland locations, as well as surface-to-surface missile storage facilities.

With the U.S. pullback, the expectation is that Britain, France, Denmark, Belgium and other NATO partners can bear the full air-combat burden.

Also on Friday, the State Department said it was encouraged by the defection to Britain of Libyan Foreign Minister Moussa Koussa.

State Department spokesman Mark Toner said U.S. officials had not yet had direct contact with the Libyan.

"We've been very explicit in saying that we believe they should read the writing on the wall that they should step down, that time is not on their side. ... It's quite clear that they need to step aside and that Colonel Qaddafi himself is de-legitimized and needs to step down."

Some in Congress questioned Gates and Mullen on Thursday about the wisdom of bowing out of a key element of the strategy for protecting Libyan civilians and crippling Muammar Qaddafi's army.

"Your timing is exquisite," Sen. John McCain, R-Ariz., said sarcastically, alluding to Qaddafi's military advances this week and the planned halt to U.S. airstrikes. "I believe this would be a profound mistake with potentially disastrous consequences."

Gates said no one should be surprised by the U.S. combat pullback, since it was planned all along, but he called the timing "unfortunate" in light of Qaddafi's battlefield gains. He noted that the air attacks are a central feature of the overall military strategy; over time they could degrade Qaddafi's firepower to a point that he would be unable to put down a renewed uprising by opposition forces, he said.

The number of U.S. Navy ships involved in the campaign had shrunk to nine as of Friday, compared to 11 at the start of the operation, and it is likely to shrink further in the days ahead, other defense officials said. Among targets struck in western Libya overnight Thursday by U.S. Air Force F-15 and F-16 fighters were a radar site and a military vehicle that transports and elevates missiles into firing position, one of the defense officials said.

Mullen and Gates stressed that even though powerful combat aircraft like the side-firing AC-130 gunship and the A-10 Thunderbolt, used for close air support of friendly ground forces, will stop flying after Saturday, they will be on standby. Mullen said this means that if the rebels' situation become "dire enough," NATO's top commander could request help from the U.S. aircraft.