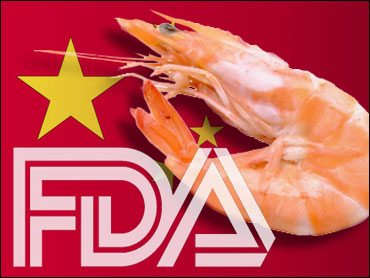 Farmed seafood joined tires, toothpaste and toy trains on the list of tainted and defective products from China that could be hazardous to a person's health.

Federal health officials said Thursday that they were detaining three types of Chinese fish — catfish, basa and dace — as well as shrimp and eel after repeated testing has turned up contamination with drugs unapproved in the United States for use in farmed seafood.

The officials said there was no immediate health risk and stopped short of ordering an outright ban.

Each year, the U.S. imports 150 million pounds of shrimp from China, a $300 million annual market, reports CBS News correspondent Bob Orr. Now Chinese "farm-raised" shrimp is off-limits and future imports will be blocked unless suppliers can show the seafood is clean.

The Food and Drug Administration announcement was only the latest in an expanding series of problems with imported Chinese products that seemingly permeate U.S. society.

Beyond the fish, federal regulators have warned consumers in recent weeks about lead paint in toy trains, defective tires, and toothpaste made with diethylene glycol, a toxic ingredient more commonly found in antifreeze. All the products were imported from China.

The New York Times reported today that approximately 900,000 tubes of tainted Chinese toothpaste has shown up in prisons, juvenile detention centers and hospitals in North and South Carolina, Georgia and Florida, including some serving the general population.

State officials in Georgia and North Carolina said no illnesses have been reported, and the toothpaste in question is being replaced with brands not manufactured in China.

China, meanwhile, insisted Thursday that the safety of its products was "guaranteed," making a rare direct comment on spreading international fears over tainted and adulterated exports.

FDA officials said the levels of the drugs in the seafood was low. The FDA isn't asking for stores or consumers to toss any of the suspect seafood.

"In order to get cancer in lab animals you have to feed fairly high levels of the drug over a long term," said Dr. David Acheson, the FDA's assistant commissioner for food protection. "We're talking not days, weeks, not even months but years. At these levels you might not reach that level, but we don't want to take a chance."

The FDA said sampling of Chinese imported fish between October and May repeatedly found traces of the antibiotics nitrofuran and fluoroquinolone, as well as the antifungals malachite green and gentian violet. Of particular concern are the fluoroquinolones, a family of widely used human antibiotics that the FDA forbids in seafood in part to prevent bacteria from developing resistance to these important drugs. The best-known example is ciprofloxacin, sold as Cipro, which made headlines as a treatment during the 2001 anthrax attacks.

The chemicals are used to help shrimp and fish survive in squalid, overcrowded fisheries along the coast of China, reports Orr. Many European countries have long-banned the chemical-laced fish.

The FDA will allow individual shipments of the five seafood species into the country if a company can show the products are free of residues of these drugs.

"This action will put a hold on the products of concern at the port of entry. This shifts the burden of proof back to the importer to prove to us that it is safe," Acheson said.

China is the third-largest exporter of seafood to the United States, according to the FDA. More than half of its global seafood exports are farmed. But only about 5 percent of farmed Chinese fish is inspected by the FDA, agency officials said.

The use of drugs in foreign fish farming operations has long been a concern of federal and state regulators. Alabama, Louisiana and Mississippi recently banned imports of catfish from China after tests detected antibiotics not approved for use in humans.

"Clearly the addition of these drugs, it's a deliberate event," Margaret Glavin, the FDA's associate commissioner for regulatory affairs, told reporters. "If they stop adding them, the problem is going to go away."

The FDA acted after finding problems with 15 percent of the Chinese seafood it tested. Glavin said the FDA also has found companies in the Philippines and Mexico using the drugs and has issued similar import alerts for those firms' products.