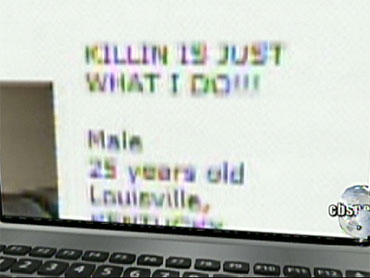 Soldiers from a Colorado unit accused in nearly a dozen slayings since returning home - including a couple gunned down as they put up a garage sale sign - could be showing a hostility fueled by intense combat in Iraq, where the troops suffered heavy losses and told of witnessing war crimes, the military said Wednesday.

The Army launched an investigation after soldiers from the 4th Brigade Combat Team, 4th Infantry Division - nicknamed the Lethal Warriors - were accused in a spate of five killings around Colorado Springs, home to Fort Carson, in 2007 and 2008.

Six other slayings involving unit soldiers occurred in Colorado and other states since 2005.

The report called for more study on the links between combat and aggressive behavior. It suggested the Army find a way to identify soldiers who have been exposed to fierce combat.

Army investigators compared the Fort Carson unit of about 3,700 soldiers with a similarly sized unit and found it suffered more combat deaths in Iraq and was deployed there longer.

Investigators focused on the cases of 14 soldiers accused of murder, manslaughter, attempted murder and aggravated assault, mostly with firearms. They found the accused had experienced heavy combat in Iraq and that half of those interviewed reported witnessing war crimes, including the killing of civilians.

In many of the cases the Army missed or failed to deal with warning signs these young men were spiraling into violence, reports CBS News national security correspondent David Martin.

"Killin' is just what I do," Kenneth Eastbridge, since convicted of conspiring to murder another soldier, said on MySpace. "Mood: enraged. Things I like: violence, death, destruction."

Robert Marko, accused of raping and slitting the throat of a mentally disabled 19-year-old girl, announced "I'm becoming a cold hearted killer and can kill without mercy or reason."

Not every one was that blatant, reports Martin, but 11 of the 14 alleged murderers had records of drug or alcohol abuse. Less than half received help from the Army.

Back home, the soldiers carried weapons with them because they felt "naked" and unsafe and had difficulty transitioning to civilian life. Some said they felt "weird" and didn't fit in, the Army report said.

"There, we were the law; here, the cops are the law," one of the accused told investigators.

The Army report says the accused claimed their commanders and fellow soldiers did not encourage them to seek help at home.

Army West Division Commander Maj. Gen. Mark Graham was at Fort Carson Wednesday and was expected to comment on the report.

Nationally, at least 121 Iraq and Afghanistan war veterans have committed a killing in the United States or been charged in one.

The Colorado slayings include the June 6, 2008, deaths of a man and a woman gunned down by a man with AK-47 assault rifle as they put up garage sale signs on a street.

Pfc. Jomar Dionisio Falu-Vives faces first-degree murder charges in the shootings. He lived nearby and told friends he liked hearing the sirens as authorities raced to the scene, according to the Army report.

Falu-Vives also faces attempted murder charges in the wounding of an Army captain shot twice while standing at an intersection.

In May, Thomas Woolly, a Fort Carson soldier and Purple Heart recipient, was arrested on suspicion of manslaughter in the slaying of a 19-year-old woman. Woolly was in Fort Carson's Warrior Transition Unit, which provides support for soldiers returning from combat who were injured or have psychiatric disorders.

Investigators also found that hospitalization rates for soldiers at Fort Carson were up to seven times higher than for the Army as a whole.