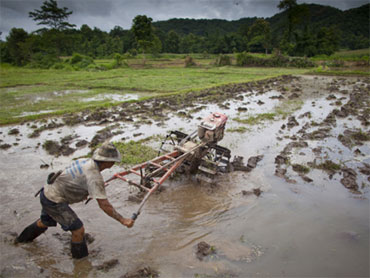 The United States was heavily criticized Friday at the U.N. climate talks in Bangkok for failing to offer emission cuts or financing for developing countries - both considered crucial to reaching a global warming pact this year.

The Bangkok talks ended just as it was announced that President Barack Obama had won the 2009 Nobel Peace Prize, for among other things strengthening the U.S. role in combatting climate change. U.N. climate chief Yvo de Boer said he hoped the award would spur progress when the U.S. delegation arrives in Copenhagen in December for crucial climate negotiations.

Mr. Obama is set to received his award in Oslo on Dec. 10 - just days after the climate talks start.

"I hope this encourages him to come to Copenhagen with an ambitious target," de Boer said. "We need that."

Earlier, the Americans took a beating from environmentalists and poor nations for failing to commit to deep emissions cuts and to provide financial aid to poorer nations.

"The developing nations are justifiably angry at the lack of progress, about the lack of credible offers by the United States, by the European Union and by Japan," said Alden Meyer, director of strategy and policy for the Union of Concerned Scientists.

Jonathan Pershing, the head of the American delegation, said the United States wanted a deal in Copenhagen but he admitted "it would be extremely difficult for the U.S. to commit to specific numbers in the absence of legislation from Congress."

In the U.S., which rejected the Kyoto Protocol because it exempted countries such as India and China from obligations, a bill that passed the House of Representatives would reduce emissions by 17 percent from 2005 levels - about 4 percent below 1990 levels - by 2020. The Senate is considering its own bill that would cut emissions 20 percent.

Negotiations have been deadlocked for months and delegates have raised doubts whether a new climate pact to rein in greenhouse gases can be reached by the time world leaders gather in Copenhagen. The pact would replace the Kyoto Protocol, which expires in 2012.

Shayam Saran, India's special envoy for climate change, told reporters said he was "dismayed" that developed nations hadn't announced plans for deep emissions cuts at the Bangkok meeting, as he had been expecting.

Most countries want a new climate pact that includes measures limiting temperature increases to 2 degrees Celsius (3.6 degrees Fahrenheit) above preindustrial levels, a level necessary to avoid the worst impacts of climate change. But so far, there is no consensus on how to reach that goal.

Industrialized nations have pledged emission cuts of up to 23 percent below 1990 levels by 2020 - far short of the 25 to 40 percent cuts scientists and activists say are needed to keep temperature increases below 2 degrees Celsius (3.6 degrees Fahrenheit).

Only Norway announced a new target at the Bangkok meeting, saying it would reduce by 40 percent, up from a previous commitment of 30 percent, by 2020.

Developing countries have said they want to do their part but have refused to agree on binding targets and want to see more ambitious cuts by the industrialized nations. They won't sign any deal until the West guarantees tens of billions of dollars in financial assistance.

"This week has witnessed a very regretful and unfortunate development which has demonstrated without a doubt the lack of seriousness of the developed countries," Lumumba Di-Aping, chairman of the developing block of nations known as the G-77 and China, told reporters. "We have witnessed one developed country after another making pronouncements that literally amount to the discarding and killing the Kyoto Protocol."