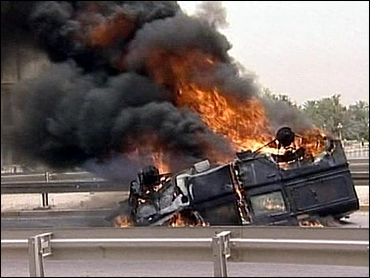 The clashes took place about sundown Monday on the southern end of Kufa and lasted for about an hour.

Kufa is located close to Najaf, where radical cleric Muqtada al-Sadr took refuge last month after U.S. authorities announced they were seeking him in the assassination last year of a moderate cleric.

In Najaf, about a thousand Iraqis marched through the street, calling for the radical cleric and his followers to leave.

U.S. troops have been involved in sporadic clashes with al-Sadr's gunmen for weeks. But the Americans have avoided an all-out assault on Najaf to avoid inflaming Shiite passions.

When the group passed by al-Sadr's office, his militia took up positions and fired into the air. But there was no clash, and the protest continued without incident.