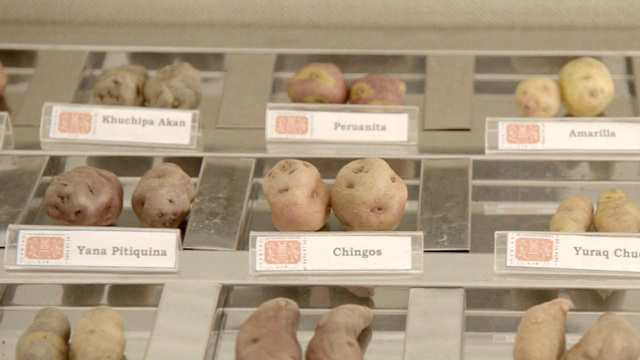 NASA and private companies are all vying to send astronauts to Mars, but when they get there, they'll all face the same problem -- growing food.

So U.S. scientists have headed to the deserts of South America to see if they can cook up a solution. Potatoes have played a starring role in one recent Hollywood film set on Mars, but it turns out growing potatoes on another planet may be far from science fiction, reports CBS News correspondent Mark Albert.

A vast plain dotted with dunes, molded by centuries of unforgiving wind and little rain, is Mars on Earth. The Pampas de La Joya desert in Southern Peru is harsh and arid and as close as it gets on our blue planet to the red one next door.

A group of scientists is trying to unearth the secret recipe for farming on Mars, hauling two tons of sun-baked soil to their cosmic kitchen two days away.

Scientists brought back the dirt, which is the main ingredient in an audacious and groundbreaking test taking place in Lima, Peru.

"This is the first-time experiment we're doing, so we don't really know how it's going to work out," explained Jan Kreuze, who is essentially the head chef for the project at the International Potato Center -- yes, potatoes.

"Can you grow potatoes on a planet that died two billion years ago?" Albert asked.

Matt Damon sure pulled it off in the 2015 movie "The Martian." After accidentally being stranded and with dwindling supplies, Damon's character, a botanist, figures out how to grow potatoes on Mars.

Kreuze thinks potatoes have "the right stuff" to grow on the inhospitable Martian surface.

"Potatoes are extremely versatile -- extremely dry conditions, extremely cold conditions, where it reaches minus 20 at night, and then you can grow it. Here we're in the tropics, all the way to the polar circle," Kreuze explained. "They are very resilient. You can grow them almost anywhere."

But "almost" is the key word.

"Well, it probably means that this soil is not ideal for potato. If you see the soil, it's almost like -- it's very dusty, so it's almost like a cement," Kreuze said. "So when we water it, it gets very compact. And it might be a problem for the seeds to push through that and get oxygen and things like that."

When CBS News visited a Lima greenhouse last month, potato seeds planted in ideal, earthly soil had already sprouted. But after two weeks, the seeds in the Martian-like dirt failed to break through. The scientists found the seeds didn't have room to breathe and the dirt was too salty.

So they'll give the next batch of seeds more space by loosening up the soil, as well as try other varieties of tubers that don't mind a little extra salt in their diet.

"It's trial and error. That's why we're doing these experiments," Kreuze said.

Kreuze and his team have a lot of options. Their center is home to the world's largest gene bank of potatoes -- 4,000 varieties of potatoes and 8,000 types of sweet potatoes.

Researchers have selected 65 for the Mars experiment.

Dr. Julio Valdivia-Silva is an astro-biologist working there for NASA. He envisions domed, climate-controlled greenhouses on Mars -- possibly even robots arriving before humans to begin planting.

Silva said shipping potatoes or any long-term food supply with the astronauts is not viable.

In March, NASA tested its Mars rocket for the first time. The U.S. space agency has launched a program to land humans there in about 15 years.

A confident Elon Musk thinks his SpaceX startup can do it in nearly half the time, with its new Falcon Heavy rocket.

The entrepreneur told The Washington Post this month his ultimate goal is a "self-sustaining city on Mars." And for that, Musk's Martians will need food. Later this summer, Kreuze and his team will also try growing potatoes in chambers that simulate the harsh Martian atmosphere.

Kreuze also shared a personal confession: When he was a kid, he really wanted to grow up to be an astronaut. He may not have reached the heavens, but his research could provide manna to millions here on Earth, where drought and climate change imperil so many.

"It's not just about Mars. We have more earthy goals in mind," Kreuze said. "Improve livelihoods, reduce hunger and reduce malnutrition. It's a pretty big challenge, but it's not impossible. And it's with these big challenges that we achieve big things, right?"

The researchers know they're on the clock. In less than two weeks, NASA will test what it calls the "largest, most powerful" booster rocket in the world in the Utah desert. It will eventually carry astronauts and those hardy potato seeds to Mars.

Other projects are in the works from Blue Origin, Virgin Galactic and Mars One.