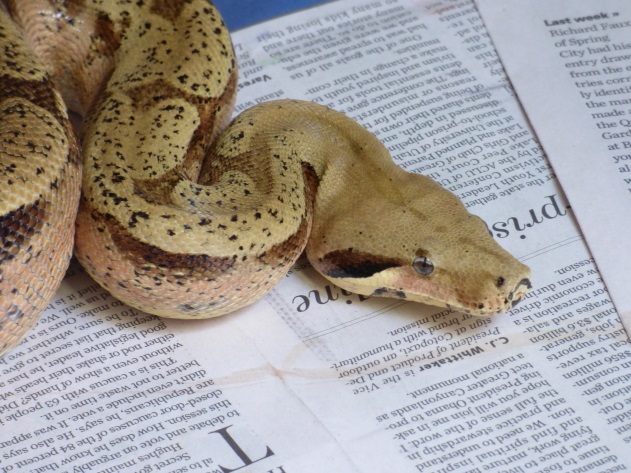 The Justice Department (DOJ) announced Wednesday that it has repatriated seven rare boa constrictors to the government of Brazil six years after their mother was brought to the U.S. in an illegal wildlife smuggling scheme.

In other words, DOJ sent Brazil a few snakes on a plane.

The snakes' mother was the only known living white (leucistic) boa constrictor. The exceedingly rare snake, known as "Lucy" or "Diamond Princess," was found in Rio de Janeiro in 2006 and transferred to the Niterói Zoo, a private foundation that rescued and rehabilitated injured wild animals. But in January 2009, Utah-based reptile collector, breeder and salesman Jeremy Stone traveled to Brazil, managed to secure possession of the snake and "unlawfully returned with it back to the United States," according to the Justice Department.

Stone wanted to breed Lucy. The white boa was expected to be able to spawn other leucistic boas, although because its white color is the result of a recessive gene, a white boa wouldn't occur among Lucy's immediate offspring but could be born in successive generations with the breeding of two snakes bearing the leucistic gene.

Stone did manage to breed Lucy, but when he began marketing the offspring - for $12,500-$25,000 (or ten to a hundred times the cost of other boas), according to National Geographic, the Brazilian government filed a petition asserting its ownership of the Diamond Princess and sought help from the U.S. in securing the return of the boa and its offspring. Federal investigators secured a warrant to seize the snake and any offspring from Stone' property in Utah. There, they found that Lucy had died. The eight snake offspring were turned over to the U.S. Marshals Service which took them to the Hogle Zoo in Salt Lake City.

Unfortunately, one of the snakes died in the zoo.

In July 2014, Stone pleaded guilty to unlawfully transporting federal wildlife into the U.S. As part of the guilty plea, he agreed to forfeit Lucy's offspring to the U.S., which asked the court to recognize Brazil's ownership claims. The court recognized those claims in February 2015.

"This case exhibited many of the hallmarks that make illegal wildlife trafficking a growing international scourge, including actors motivated by greed who illegally smuggled rare and precious wildlife across international boundaries," said DOJ Assistant Attorney General Caldwell. "The return of the precious snakes to Brazil brings to an end this years-long international saga, and serves as an example of our commitment to working with law enforcement partners in Brazil and elsewhere to combat transnational crime."