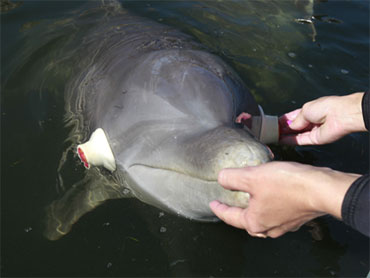 SAN DIEGO - A Naval training exercise that included an underwater blast off San Diego's coast has been linked to at least three dolphin deaths earlier this month, prompting a probe into whether the military violated the federal law that protects marine mammals.

Navy officials, who reported the deaths of the long-beaked common dolphins following the March 4 detonation off the coast, say they were following proper procedures and will continue with the training.

The National Marine Fisheries Service plans to take another look at the Navy's pending request to disturb marine mammals between Imperial Beach and Coronado, where it conducts amphibious and special warfare training, agency leaders told the San Diego Union-Tribune on Friday.

The Navy's application, which has been in the works for years, says it does not anticipate any dolphin deaths due to training. But following the March 4 incident, the fisheries service opened an enforcement case to determine whether the Navy violated the Marine Mammal Protection Act of 1972, which is designed to safeguard dolphins, whales and similar creatures.

Along with the three deaths reported to the fisheries service, two other dead dolphins were found later, but it's not clear if they were injured by the Navy exercises.

Environmentalists have called on the Navy to suspend activities involved in the deaths and conduct a transparent investigation.

But Navy officials said the program it calls "mission-critical" would continue. They said they were following proper procedures on the day of the blast and are conducting their own investigation to see if changes are necessary.

"We have an excellent track record in our training and have exacting standards that we apply to try to prevent these types of incidents," Cmdr. Greg Hicks, a spokesman for the Navy's Third Fleet, told the Union-Tribune. "We do our best to protect marine life while conducting essential training."

Hicks said there were no dolphins in view when the training countdown began, and when they could be seen it was too late to stop safely.

He could not say how many underwater blasts the Navy has performed at the site in recent years. Documents show the Navy's permit request for underwater explosives involve up to 415 "small" detonations during 311 training events a year.

Underwater explosives are important for clearing obstacles out of harbors so ships can enter. When the Navy practices with them offshore, Hicks said observers look for dolphins, seals, whales and similar creatures that might swim into the danger zone.

Michael Jasny of the Natural Resources Defense Council, which years ago sued the Navy to minimize damage to whales by sonar, said the Navy doesn't have the best environmental record when it comes to ocean life.