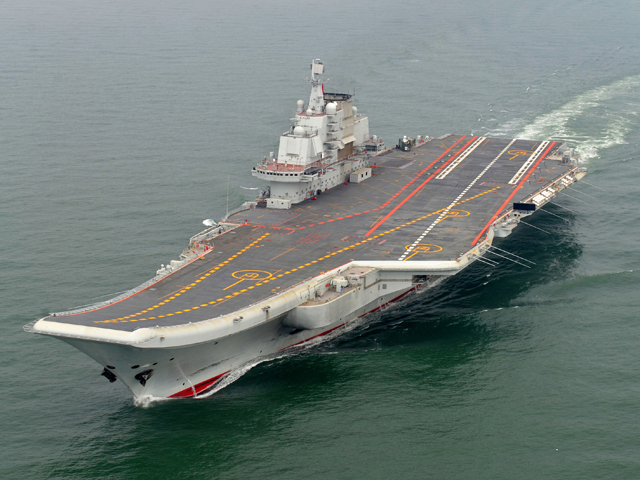 BEIJING -- China this week hosted a visit to its sole aircraft carrier by senior U.S. Navy officers amid tensions over reported plans by Washington to challenge Beijing's territorial claims in the South China Sea.

The delegation of 27 commanders and captains boarded the Liaoning on Monday and held discussions on "exercise management, personnel training, medical protection and strategies in carrier development," the Chinese navy said on its official microblog.

That was followed Tuesday morning by a visit to the navy's submarine academy, where further dialogues were held, the navy said.

The visits appear to reflect the growing momentum of military exchanges between the sides, despite occasional flare-ups in tensions and Washington's complaints over what it calls the Chinese military's lack of transparency.

The visits follow reports that the U.S. Navy plans to sail a warship inside the 12-nautical-mile territorial limit of one of China's newly constructed islands formed by piling sand atop existing reefs and atolls. That would demonstrate Washington's refusal to recognize China's claims in the South China Sea, especially artificial islands that the U.S. insists cannot be classified as sovereign territory.

China claims sovereignty over almost all of the South China Sea and its maritime features, while five other governments also claim it in part or in whole. China's growing assertiveness and a renewed U.S. focus on Asian military affairs are seen as fueling a rise in tensions in the region, which is home to key shipping lanes, rich fishing grounds and a potential wealth of mineral resources.

Both China and the U.S. appeared to want to keep this week's visits low-key, with China's official Global Times newspaper not reporting on them until Wednesday. The U.S. Navy's official website made no mention of them.

The visits had been long planned and were in reciprocation for a weeklong visit by 29 Chinese naval officers to the U.S. in February, the first time China had sent a delegation of such size, reported the Global Times, which is published by the ruling Communist Party's flagship People's Daily newspaper.

The Global Times quoted the head of the Chinese delegation, Commander Zhang Junshe, as saying exchanges of front-line officers was vital to "reducing miscalculations and misjudgments and boosting mutual understanding and trust."

The Liaoning was commissioned three years ago after China spent more than a decade refurbishing an incomplete hull purchased from Ukraine, installing all new propulsion systems, weaponry and other key equipment. Officially categorized as a test platform, it has yet to receive its full air complement.

Then-U.S. Defense Secretary Chuck Hagel was the first foreign visitor to the Liaoning, touring the ship last year with a small delegation at its home port in the northern city of Qingdao.

China is believed to have recently begun work on its first entirely home-built carrier, and is steadily adding cutting edge frigates, destroyers and nuclear submarines to its fleet.