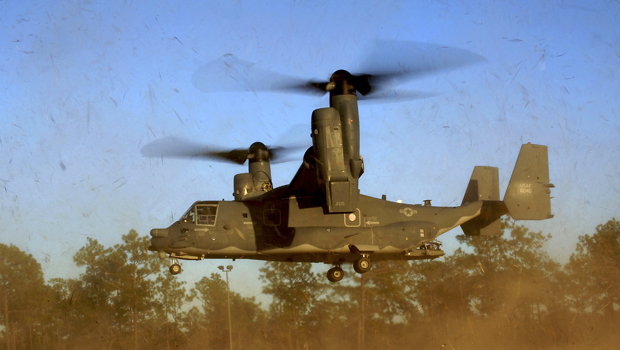 NAIROBI, Kenya -- Gunfire hit three U.S. military aircraft trying to evacuate American citizens in a remote region of South Sudan that on Saturday became a battle ground between the country's military and renegade troops, officials said. Four U.S. servicemembers were wounded in the attack in the same region where gunfire downed a U.N. helicopter the day before.

The U.S. military aircraft were about to land in Bor, the capital of the state of Jonglei and scene of some of the nation's worst violence over the last week, when they were hit. The military said the four wounded troops were in stable condition.

The U.S. military said three CV-22 Ospreys - the kind of aircraft that can fly like a helicopter and plane - were "participating in a mission to evacuate American citizens in Bor." A South Sudan official said violence against civilians there has resulted in bodies "sprinkled all over town."

"After receiving fire from the ground while approaching the site, the aircraft diverted to an airfield outside the country and aborted the mission," the statement said. "The injured troops are being treated for their wounds." It was not known how many U.S. civilians are in Bor.

After the aircraft took incoming fire, they turned around and flew to Entebbe, Uganda. From there the servicemembers were flown to Nairobi, Kenya aboard a U.S. Air Force C-17 for medical treatment, the statement said.

An official in the region who insisted on anonymity to share information not made public told The Associated Press the Americans did not tell the top commander in Bor - Gen. Peter Gadet, who defected from the South Sudan military this week - that they were coming in, which may have led to the attack. The U.S. statements said the gunfire was from unknown forces.

South Sudan's military spokesman, Col. Philip Aguer, said that government troops are not in control of Bor, so the attack on the U.S. aircraft has to be blamed on renegade soldiers.

"Bor is under the control of the forces of Riek Machar," Aguer said, referring to the ousted vice president.

The U.S. Embassy in Juba said it has evacuated at least 450 Americans and other foreign nationals from Juba this week and had hoped to begin evacuations from Bor. The U.S. Ospreys were hit one day after small arms fire downed a U.N. helicopter in the same state.

The U.N. on Friday sent four helicopters to extract 40 U.N. peacekeepers from a base in Yuai, also in Jonglei, U.N. information officer Joe Contreras said. One helicopter was fired upon and executed an emergency landing in Upper Nile state, he said. No casualties occurred during the incident.

"There is fighting going on in Bor town, yes, because since morning they have continued to attack the civilian population," Lueth said, talking about renegade troops. "They have gone as far as not respecting the U.N. compound."

He said fighting started early Saturday after reports came in that rebels there were shooting indiscriminately at civilians.

"The bodies are sprinkled all over the town," he said. No death toll could be estimated, he said.

South Sudan President Salva Kiir, an ethnic Dinka, said this week that an attempted coup triggered the violence now pulsing through South Sudan. He blamed the former vice president, Machar, an ethnic Nuer.  But officials have since said a fight between Dinka and Nuer members of the presidential guard triggered the initial violence late Sunday. Machar's ouster from the country's No. 2 political position earlier this year had stoked ethnic tensions.

The violence has killed hundreds and has world leaders worried that a full-blown civil war could ignite in South Sudan. The south fought a decades-long war with Sudan before a 2005 peace deal resulted in a 2011 referendum that saw South Sudan break away from the north, taking most of the region's oil wealth with it.

Lueth described Machar as "the rebel leader," saying the forces that control Bor believe they are fighting on his behalf. Machar's whereabouts remain unknown, but he has said in recent interviews that he is in hiding somewhere in South Sudan.

An International Crisis Group expert on South Sudan told the AP on Friday that rebels have taken control of at least some of South Sudan's oil fields, an issue that could bring Sudan into the conflict. South Sudan's oil flows north through Sudan's pipelines, providing Khartoum with much needed income.

The U.N. Security Council on Friday said the weeklong violence could affect neighboring countries and the entire region.

Kenya announced it was sending in Kenyan troops to evacuate 1,600 Kenyans stranded in South Sudan, many of them in Bor.

Mr. Obama, who is vacationing in Hawaii, was keeping an eye on the tense situation in South Sudan. He said continued violence and militancy in South Sudan may cost the world's newest country the support of the U.S. and other nations.

"This conflict can only be resolved peacefully through negotiations," the White House said in a statement. "Any effort to seize power through the use of military force will result in the end of longstanding support from the United States and the international community."

Secretary of State John Kerry called Kiir to urge the South Sudanese leader to avoid ethnic conflict, preserve the welfare of those fleeing the conflict and protect U.S. citizens there. Kerry was sending a special envoy to the region and told Kiir that South Sudan's challenges require leadership and political dialogue, the State Department said.

Mediators from East Africa continued to try to help negotiate peace. Ethiopia's Foreign Ministry said that they have held "productive" talks with Kiir and that consultations were continuing. Kiir has agreed to "unconditional dialogue" to try to stop the violence.