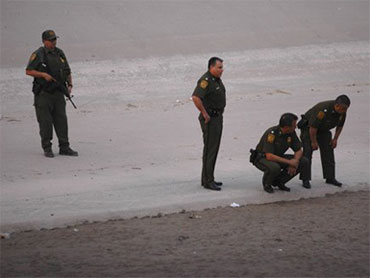 The shooting, which happened Monday evening beneath a railroad bridge linking the two nations, drew sharp criticism from Mexico, where the government said Tuesday that "the use of firearms to repel attacks with stones represents disproportionate use of force, particularly coming from authorities who have received specialized training."

It was the second death of a Mexican at the hands of Border Patrol officers in less than two weeks, and the case threatened to swell into a full-blown international incident when U.S. and Mexican officials traded suggestions of misconduct.

Arturo Sandoval, a spokesman for the Chihuahua Attorney General's office, said a spent 40-mm shell was found near the body - raising the question of whether the fatal shot was fired inside Mexico, although he did not explicitly make that suggestion. That would violate the rules for Border Patrol agents, who are supposed to stay on the U.S. side of the border.

The official, who agreed to discuss the matter only if not quoted by name, said the video also shows what seem to be four Mexican law enforcement officers driving to the edge of the dry but muddy bed of the Rio Grande, walking across to the U.S. side, picking up an undetermined object and returning to Mexico near the area where the boy's body was. Like their U.S. counterparts, Mexican law officers are not authorized to cross the border without permission.

According to the FBI, Border Patrol agents were responding to a group of suspected illegal immigrants being smuggled into the U.S. near the Paso Del Norte bridge, across from Ciudad Juarez around 6:30 p.m. Monday.

One suspected illegal immigrant was detained on the levee on the U.S. side, the FBI said in a statement. Another Border Patrol agent arrived on the concrete bank where the now-dry, 33-feet (10-meter) wide Rio Grande is, and detained a second suspect. Other suspects ran back into Mexico and began throwing rocks, the FBI said.

At least one rock came from behind the agent, who was kneeling beside the suspected illegal immigrant who he had prone on the ground, FBI spokeswoman Andrea Simmons said.

The agent told the rock throwers to stop and back off, but they continued. The agent fired his weapon several times, hitting one who later died, said the FBI, which is leading the investigation because it involved an assault on a federal officer. The agent was not injured, Simmons said.

Chihuahua State officials released a statement Tuesday demanding a full investigation into the death of the boy, identified as Sergio Adrian Hernandez Huereca.

The boy was shot once near the eye, Sandoval said. Authorities are still investigating the bullet's trajectory, he said.

Sandoval said he couldn't comment on the video reported by the U.S. official because he didn't know anything about it.

"I am unaware about those hypotheses," he said. "What I can tell you is that there is an ongoing investigation."

Sandoval said investigators were questioning three teenagers who were with the victim at the time of the shooting.

The boy's sister, Rosario Hernandez, told Associated Press Television News that her brother was playing with several friends and did not plan to cross the border.

"They say that they started firing from over there and suddenly hit him in the head," she said Monday.

His mother, Maria Guadalupe Huereca, told Milenio TV in Mexico that her son had gone to visit his brother, who handles luggage at a border customs office. While there, he met up with a group of friends and they decided to hang out by the river, she said.

"That was his mistake, to have gone to the river," she said. "That's why they killed him."

She said he ran and hid underneath one of the bridge's pillars upon hearing gunfire.

"He was a boy, and even then they killed him," she said. "I ask that they punish them. ... They left me without anything."

Sergio Belmonte, spokesman for the Ciudad Juarez mayor, said state justice officials were performing an autopsy before releasing the body to the family.

Mexico's Foreign Relations Department said it "energetically condemns" the shooting and demanded "an expeditious and transparent investigation of the facts and, if applicable, punishment of the guilty."

"Mexico is aware of the existing risks in the region, but, according to international standards, lethal force must be used only when the lives of people are in immediate danger and not as a dissuasive measure," it said.

The department said its records indicated the number of Mexicans killed or wounded by immigration authorities rose from five in 2008 to 12 in 2009 to 17 so far this year, which is not half over.

"It is a deadly force encounter, one that justifies the use of deadly force," Bonner said.

The violence in Mexico combined with assaults on Border Patrol agents in the U.S. has increased the level of apprehension agents have about their safety, Bonner said.

Less than two weeks ago, Mexican migrant Anastacio Hernandez, 32, died after a Customs and Border Protection officer shocked him with a stun gun at the San Ysidro border crossing that separates San Diego and Tijuana, Mexico.