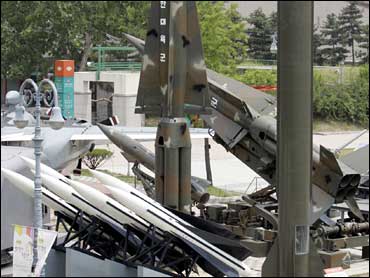 The Bush administration is weighing responses to a possible North Korean missile test that include attempting to shoot it down in flight over the Pacific, defense officials told The Associated Press on Tuesday.

Because North Korea is secretive about its missile operations, U.S. officials say they must consider the possibility that an anticipated test would turn out to be something else, such as a space launch or even an attack. Thus, the Pentagon is considering the possibility of attempting an interception, two defense officials said, even though it would be unprecedented and is not considered the likeliest scenario.

The officials agreed to discuss the matter only on condition of anonymity because of its political sensitivity.

The first sign of a North Korean launch would come from an infrared satellite that would detect the heat of the missile's rocket plume as it lifted off the pad, CBS News national security correspondent David Martin reports. As the missile gained altitude, it would be picked up by the radar of an Aegis cruiser and then by a giant radar based in Alaska.

Within three or four minutes, the radars would have collected enough data to compute the trajectory of the missile and answer the question of where is it going to land, Martin reports.

Pentagon spokesman Bryan Whitman said he could not say whether the unproven multibillion-dollar U.S. anti-missile defense system might be used in the event of a North Korean missile launch. That system, which includes a handful of missiles that could be fired from Alaska and California, has had a spotty record in tests.

Although shooting down a North Korean missile is a possibility, the Pentagon also must consider factors that would argue against such a response, including the risk of shooting and missing and of escalating tensions further with the communist nation.

Even if there were no attempt to shoot down a North Korean missile, it would be tracked by early warning satellites and radars, including radars based on ships near Japan and ground-based radars in Alaska and California.

Robert Einhorn, a senior adviser at the Center for Strategic and International Studies, said a U.S. shootdown of a North Korean missile on a test flight or a space launch would draw "very strong international reaction" against the United States. He saw only a small chance that the U.S. would attempt a shootdown.

A North Korean diplomat said the communist nation's self-imposed moratorium on long-range missile launches applies only when the country is in dialogue with the U.S., Yonhap news agency reported Wednesday.

"Some say our missile test launch is a violation of the moratorium, but this is not the case," Han Song Ryol, deputy chief of North Korea's mission to the United Nations, told Yonhap in an interview from New York.

"North Korea as a sovereign state has the right to develop, deploy, test fire and export a missile," he said.

However, Han didn't directly say the country was actually moving toward a launch in the reported comments.

North Korea imposed its own moratorium in 1999 amid friendlier relations with the U.S. during the Clinton administration. During a 2002 summit with Japan, North Korean leader Kim Jong Il signed an agreement to extend the moratorium until at least 2003 — and reaffirmed the launch ban at another summit in 2004.

The North's alleged moves in recent days toward its first long-range launch since 1998 have drawn condemnation from regional powers and raised tensions.

The U.S. has said it has contacted the North directly through its U.N. mission in New York. The North has refused to return to international talks on its nuclear program that include the United States since November, in anger over a U.S. crackdown on the country's alleged illicit financial activity.

Han said the current tension should be resolved through discussion.

"We are aware of the U.S. concerns about our missile test-launch. So our position is that we should resolve the issue through negotiations," he said, according to Yonhap.

Pyongyang has consistently pressed for direct dialogue with the United States, while Washington insists it will only speak to the North at the six-nation nuclear talks.

Signs of North Korean preparations to launch a long-range ballistic missile, possibly with sufficient range to reach U.S. territory, have grown in recent weeks, although it is unclear whether the missile has been fully fueled. U.S. officials said Monday the missile was apparently fully assembled and fueled, but others have since expressed some uncertainty.

Bush administration officials have urged the North Koreans publicly and privately not to conduct the missile test, which would end a moratorium in place since 1999. That ban was adopted after Japan and other nations expressed outrage over an August 1998 launch in which a North Korean missile flew over northern Japan.

At the time of the 1998 launch, the United States had no means of shooting down a long-range missile in flight. Since then, the Pentagon has developed a rudimentary system that it says is capable of defending against a limited number of missiles in an emergency — with a North Korean attack particularly in mind.

The Government Accountability Office, Congress' investigative arm, says the Pentagon has spent $91 billion on missile defense over the past two decades.

The 1998 event turned out to be a space launch rather than a missile test; U.S. officials said the satellite failed to reach orbit.

U.S. and international concern about North Korea's missile capability is heightened by its claims to have developed nuclear weapons. It is not known whether they have mastered the complex art of building a nuclear warhead small enough to fit a long-range missile, although in April 2005 the director of the Defense Intelligence Agency, Vice Adm. Lowell Jacoby, told Congress that North Korea was capable of arming a missile with a nuclear warhead. U.S. officials have since called it a "theoretical capability."

No administration official has publicly raised the possibility of bombing the North Korean missile before it can be launched. Jan Lodal, a senior Pentagon policy official during the Clinton administration, said in an interview Tuesday that he would not rule out a pre-emptive strike. He said it would be the surest away of eliminating the threat of being surprised by the launch of a Taepodong-2, an intercontinental ballistic missile that some believe has enough range to reach U.S. territory.

David Wright, a senior scientist at the private Union of Concerned Scientists, said he strongly doubts that the Bush administration could back up its claims of having the capability to shoot down a North Korean missile.

"I consider it to be rhetorical posturing," Wright said. "It currently has no demonstrated capability."

The last time the Pentagon registered a successful test in intercepting a mock warhead in flight was in October 2002. Since then, there have been three unsuccessful attempted intercepts, most recently in February 2005.

Rick Lehner, chief spokesman for the Pentagon's Missile Defense Agency, said the next intercept test is scheduled for the August-September period, to be followed by another before the end of the year. Lehner said that beginning about a year ago, the system has periodically been placed in "operational status."

Baker Spring, a Heritage Foundation analyst and strong advocate of U.S. missile defenses, said he believes that "in theoretical terms" the U.S. system is a capable of defeating a North Korean missile. And he thinks that if the North Koreans launched on a flight pattern that appeared threatening to the United States, the administration "would be well within its rights" under international law to shoot down the missile.

The Washington Times reported Tuesday that the Pentagon has placed its missile defense system in an active status for potential use.