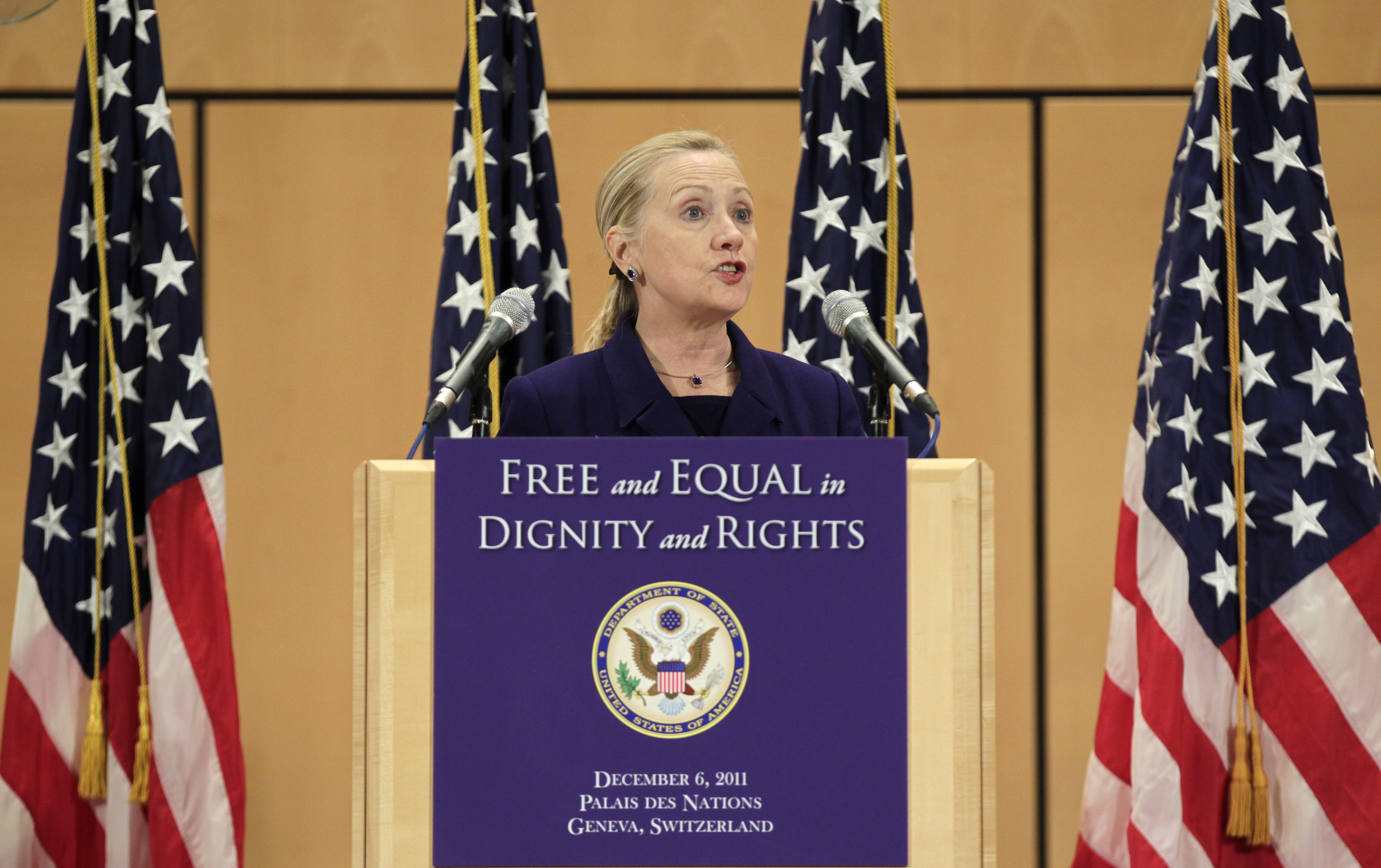 President Obama and Secretary of State Hillary Clinton announced Monday that the United States will now use foreign aid as a tool to improve Lesbian, Gay, Bisexual and Transgender rights abroad.

"I am deeply concerned by the violence and discrimination targeting LGBT persons around the world whether it is passing laws that criminalize LGBT status, beating citizens simply for joining peaceful LGBT pride celebrations, or killing men, women, and children for their perceived sexual orientation," Mr. Obama said in a presidential memorandum.

The memorandum includes a number of instructions for federal agencies doing work overseas, among them to improve protections for LGBT asylum seekers and to strengthen opposition to criminalization of LGBT status or conduct. It instructs the State Department, the U.S. Agency for International Development and other agencies to use foreign aid as a mechanism to "build respect for the human rights of LGBT persons."

"The struggle to end discrimination against lesbian, gay, bisexual, and transgender persons is a global challenge, and one that is central to the United States' commitment to promoting human rights," Mr. Obama said in a statement.

LGBT advocates in the U.S. have praised Mr. Obama for the repeal of the military's "Don't Ask, Don't Tell" policy and his administration's decision not to defend the Defense of Marriage Act, which defines marriages the legal union between one man and one woman. Mr. Obama has called his position on gay-marriage "evolving," though he currently opposes it.

In conjunction with the memorandum, Secretary of State Hillary Clinton spoke in Geneva Tuesday in favor of the rights of LGBT rights, which she says are "still denied in too many parts of the world today. "

"In many ways, they are an invisible minority," Clinton said of LGBT individuals, according to her prepared remarks. "They are arrested, beaten, terrorized - even executed. Many are treated with contempt and violence by their fellow citizens while authorities empowered to protect them look the other way - or join in the abuse. Too often, they are denied opportunities to work and learn, driven from their homes and countries, and forced to suppress or deny who they are to protect themselves from harm."

After saying the United States' own record on the issue is "far from perfect" and that there is still work to be done domestically, Clinton said the international community must act despite the fact that opposition based on "deeply held personal, political, cultural, and religious beliefs" remains. She stressed that "gay rights and human rights" are one in the same, saying both are violated when citizens experience "corrective rape," are forcibly subjected to hormone treatments or are murdered, beaten or prosecuted for their orientation.

"Being gay is not a Western invention," Clinton said in response to suggestions that those outside the West can thus reject and homosexuals. "It is a human reality."

Rea Carey, executive director of the National Gay and Lesbian Task Force, lauded the initiative and remarks, which the administration says marks the first effort by the U.S. government to combat discrimination against LGBT individuals abroad.

"We applaud the president for this monumental step forward, and thank Secretary Clinton for taking to the world stage to send the unequivocal message that LGBT people everywhere should be able to live freely and with dignity," said Carey.

"Promoting special rights for gays in foreign countries is not in America's interests and not worth a dime of taxpayers' money," he said. "...President Obama has again mistaken America's tolerance for different lifestyles with an endorsement of those lifestyles. I will not make that mistake."